A serving police sergeant (name with held) has been arrested by his colleagues in Anambra state for allegedly raping a 13 year old daughter of a popular pastor at Ukpor in Idemili Council Area of the state. 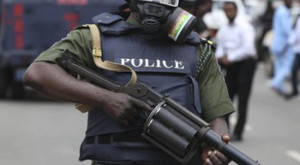 African Examiner learnt that the young girl who is now two months pregnant opened up to her parent last Saturday on who is responsible for the pregnancy.

According to a close family source, who does not want to be quoted, the girl, told her parents that the policeman had warned her not to mention his name to anybody or be killed.

The source said the threat made her to keep the secret to herself “until few days ago, when she complained to her mother about some pregnancy symptoms, which after thorough investigation led to her confession.

Our correspondent gathered that the goal scorer police man, initially denied the allegation and was supported by the Divisional Police officer (DPO) Nnewi South, Ndidiamaka Oguamalam which made the victim’s parent to petition a Human Rights group and the state Commissioner of Police.

The girl, our correspondent gathered said that the police man ordered her at gun point to have sex with him on her way back from school, a claim the suspect denied, saying the action was carried out on a cordial agreement between him and the girl, and never by force.

The Nnewi south DPO, who denied any knowledge of the sex scandal case when initially contacted, later referred our correspondent to the state police public Relations officer PPRO , Emeka Chukwuemeka for proper briefing saying she has transferred the matter to the Criminal investigation Department CID in Awka, the Anambra state capital.

Hear the DPO initially: ‘’I don’t have such case here, go to the PPRO, I have transferred the rape case to the State CID Awka . Let them go to the CP or the PPRO because I am not authorized to speak to journalists”.

However, when contacted the PPRO, Emeka Chukwuemeka confirmed the command received such report but said investigations are still ongoing with a view to ascertaining the level of culpability of the said police officer.

The command image-maker, stated that proper investigation in the matter is necessary, because the state commissioner of police, Usman Gwary “does not tolerate any kind of mess up by his officers and rank and file” he said.

According to him, “the matter is under investigation and I will brief you later’’, the PPRO promised.