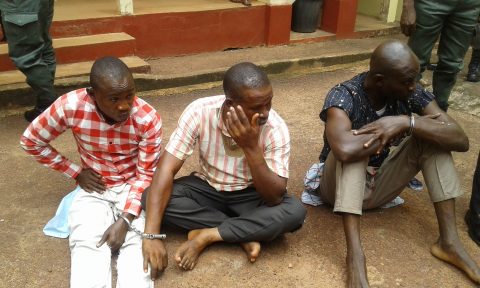 Danmallam Mohammed, the state Commissioner of Police disclosed this Thursday while parading Ugwu alongside other suspects who belongs to various syndicate gangs at the command’s headquarters in Enugu.

He hinted that the Prison’s officer and two of his gang members specialized on monitoring and trailing people that went to bank to make withdrawals.

According to the Enugu police boss, the suspects monitored and trailed their victims to a point where they could easily force the door or windscreen of their car open with their instruments and rob their victims of their money.

He said one out of the total nine suspects paraded is a member of a syndicate that specializes in buying goods from traders and generating fake payment alert to the owner of the goods without him knowing.

The Enugu Police Commissioner CP stated that the suspects were nabbed along Ogui Road in Engu following intelligence information.

The suspect, he said, was said to have held the girl on her neck while raping her, a development he claimed led to the death of the victim.

The suspects, “were arrested along Enugu Onitsha Express Road with a tricycle loaded with the cut to size armored cables

Two other suspects identified as Ekene Okechukwu from Anambra State, Alagba  Gabriel from Ebonyi State were equally paraded in connection with the recent Explosion at the residence of President General of Apex Igbo Social Cultural Organization, Ohanaeze Ndigbo, Nnia Nwodo .

The suspects, believed to be members of the proscribed Indigenous People of Biafra {IPOB} were arrested through intelligence information in Enugu and Lagos.

Mohammed further disclosed that three other suspects were arrested by operatives of the command over stealing and armed robbery, assuring that after investigations, the suspects would be charged to court.