Robert Mugabe Travails And The Lessons To Draw 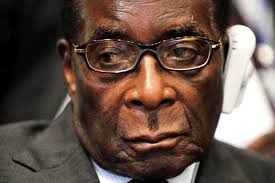 (AFRICAN EXAMINER) – When one is favoured with longevity, says my grandfather, he must in the same vein contend with one out of the these two inherent probables. If the individual is not met with a flood of blessings, chances are that such a fellow may be visited with torrents of afflictions during this extra or ‘injury time’. But unfortunately, I did not for a long time deemed it necessary to unravel what this words of wisdom connotes until recently when Robert Mugabe’s saga burst forth.

A few months back, after reading a piece authored by Mbizo Chirasa, a Poet and very prominent voice in Zimbabwe, of which the content will form the plot of this discourse, I concluded within myself that my dear Robert Mugabe’s days as president of Zimbabwe are numbered. But in the same vein, I neither envisaged it coming this soon nor contemplated it occur via undemocratic means.

Mbizo Chirasa in that piece opined that ‘the revolutionary CADRES believes that change in Zimbabwe must begin by changing the leadership matrix in the ruling party, including laying off their political lotterist Robert Mugabe while adding that c CdeChe and his cabal are tired of the Mugabe hegemony.

Mugabe, in that article, was roundly blamed for the infuriating scorn, the liberation veterans received from the verbal cyclone Grace Mugabe, whose verbal acid burns the fontanels of the eldest liberation strongmen, most of whom are victimized daily in the corridors of power. While concluding that Grace Mugabe has become Zimbabwe and Zimbabwe is now Grace Mugabe. She has tasted more sweetness than bitterness in the power trenches since her meteoric rise to the politburo – the highest decision making Body in the ZANU-PF power structures. Case closed.

Very instructively, the above synoptic gospel marked the beginning of the end of the great Mugabe as the Zimbabwean president. While Mugabe travails have become a pulpit, it is now left for all to listen to what he sermonize. Conversely, Robert himself has learned no lesson from his current situation as he is still brandishing hope against all known logic

Adding context to this discourse, I will state categorically that I am not in support of his removal through an undemocratic means and will never support any group that gets to power using non-legitimate and undemocratic means.

With the above in mind, it is also pertinent that I situate firmly that the stage for this debacle was set by President Mugabe’s total consecration of himself, his government, and the soul of Zimbabwe to the ‘immaculate’’ hands of Grace Mugabe, his wife.

But In doing that, he failed as a student of history to harness the social responsibility postulations which strictly advised that every freedom must go with a responsibility. This political miscalculation of Mugabe as a person that loves education so much should be enough reason for him to seek further tutelage on managing women that is if he survives this onslaught. And provides a big lesson for all.

This occurred because President Mugabe and his wife Grace were deceived by a barefaced illusion that made them feel more nationalistic than patriotic. A compelling evidence for this claim is that at a point, they viewed Zimbabwe as their personal property thereby affirming indispensability and superiority over other Zimbabweans.

That to my mind was the missing link that landed Mugabe in this sorry state. A situation that should sound a note of warning to our present crop of leaders. The recent outburst by a serving senator of the federal republic that he will spend the rest of his life in the Senate, is a symptom of ‘Mugagbenism’ and need to be reminded that political positions are not ‘hereditary principalities’.

In the same vein, I am well aware that Baba Mugabe as a scholar must have come across the aphorism which says that ‘for one to know about the road ahead, he must ask those coming back’. But on this ideology, Mugabe, again, failed as he deliberately decided not to ask or learn from the likes of Gnassingbe Eyadema of Togo.

He did not also remember at any point to seek leadership tutelage from Mobutu Seseseko of Zaire and other African presidents via their biographies. Instead, he banked on his six Degree certificates and on and the ‘grace’ of Grace Mugabe. He brazenly allowed power to move from the corridor to the bedroom.

As a typical African, He overlooked the slim line that separates family -hood from leadership. Mugabe to my mind was a victim of ‘defocused leadership vision and his current predicament, we should draw a lesson from.

Still on the negative side, when the economy of Zimbabwe is peeped into, one will discover without labour that Robert was more of a burden than an asset. To buttress this point, it is on record that Mugabe led administration made virtually all Zimbabweans millionaires but economically powerless occasioned by uncontrollably galloping inflation. Yet, he did not border to carry out self-introspection that will help unravel the damage/disservice he was doing to both the economy and the people.
Comparatively, while Mugabe is bemoaning his current plight, the event though still unfolding has presented a very good learning platform for the current leaders in Africa as well as the leadership novitiates. But failure to draw from a lesson from his travails will definitely lead to the vicious circle of leadership failures and in turn increase the number of causalities.

To the Military, I hope and pray that their role will remain strictly interventionist function.