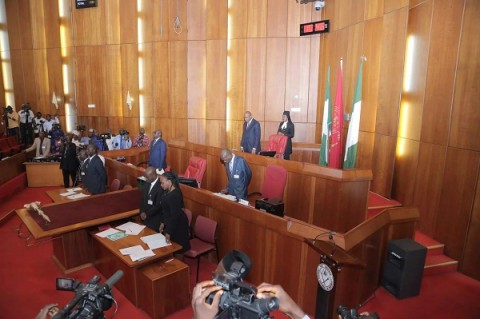 ABUJA, NIGERIA (AFRICAN EXAMINER) – The bill seeking to make debates for Presidential and Governorship candidates of major political parties in the country mandatory ahead of the 2019 general election has passed second reading.

In his lead debate, Senator Buhari said the bill was a proposal to give legislative backing for establishment of a commission with responsibility to organize and conduct debates for all the candidates cleared by the Independent National Electoral Commission, INEC, to participate in election into the offices of the President and Vice President of the country as well as Governor and Deputy Governor of a state.

“The bill, if considered and passed by this hallowed Chamber, will strengthen our democracy and bring it in conformity with practice in other renowned democracy of the world, “he said.

Citing the United States of America, where he noted that Debates for candidates of major political parties going into elections had become customary following the debut of the practice in 1960 between the then Democratic nominee John Kennedy and his Republican rival, Richard Nixon, Buhari urged his colleagues to support the bill for passage.

According to him, the debate is the de facto election process in the United States, upon which chances of candidates in such elections are measured, saying “an analogous experience of this crucial indispensability of electoral debate is the current presidential debate between Hillary Clinton of the Democratic Party and Donald Trump of the Republican party’.

He stated further that the election debate bill, if passed into law, will be used to sample the candidates’ knowledge on a wide range of issues, like a detailed analysis of how they intend to drive economy, foreign, health and education policies among others adding that anybody who desires to be a Governor or President should be confident enough to lay a detailed analysis of his or her plans before the electorate.

This, according to him, will “offer the electorates the avenue to evaluate candidates and vote along ideological lines rather than on ethnic or religious allegiance as it is prevailing in the country today.”

Supporting the bill, Senator Emmanuel Bwacha (PDP Taraba South), said the bill was long overdue because it has been embarrassing for Nigerian electorates over the years to be electing Presidents upon Presidents without having a platform of interfacing with them on what and what programmes they have in stock for the country.

“This bill is surely a welcome development for Nigerian electorates as far as the proposed debates are concerned”, he said.

Though Senator Ben Bruce (PDP Bayelsa East), also supported the bill as far as Presidential and gubernatorial debates are concerned, but cautioned that government should not organize and fund such debates through the proposed commission.

According to him, if such commission is created in the mode of the conventional ones being run and funded by the government, the motive for such debates would be defeated as candidates of parties not in government would have no trust or confidence in such arrangement.

“Yes, Nigerian electorates want debates for Presidential and Gubernatorial candidates of major political parties before election, but the body to organize and carry out such debates must be funded by the private sector as being done in advanced democracies”, he stressed.

The bill after scaling second reading was referred to Senate committees on Establishment and Public Service in collaboration with the one on Independent National Electoral Commission (INEC) for more legislative inputs within the next three weeks.