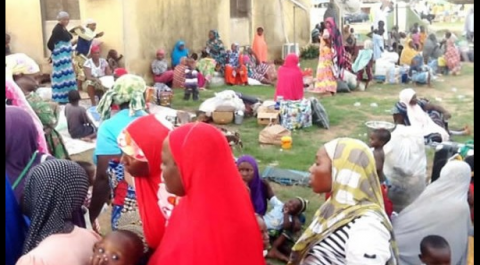 ABUJA, NIGERIA (AFRICAN EXAMINER) – The Senate on Tuesday set-up an adhoc committee to probe spendings by the Federal Government on the humanitarian crisis in the North-east in view of the allegation of massive diversion of relief materials meant for the Internally Displaced Persons (IDPs).

The Adhoc Committee chaired by Senator Shehu Sani from Kaduna State is also to hold a public hearing to unravel the funds already committed to ameliorating the plight of the IDPs, and how the fund is being expended by the agencies of government saddled with the responsibility. The Senators also resolved to donate N32.7million to be contributed by the 109 Senators in support of the IDPs in the area of welfare.

These and other resolutions of the Senate followed a motion titled “Mounting Humanitarian Crisis in the North-East sponsored by Senator Baba Kaka Bashir Garbai (Borno Central) and co-sponsored by 18 other senators.

Senator Garbai in his lead debate urged the Senate to note with grave concern the unfolding humanitarian crisis in the North Eastern part of the country which has continued to be of concern to the international community and the media.

He noted that according to UNICEF report, about 4.5million people are in dire need of assistance, while one million of the number were in danger of extreme malnutrition.

He lamented that about two million people are beyond the reach of aid and presently at the risk of starvation, thereby making Western diplomats to describe the response of the Federal Government to the crisis as a “disgrace.”

He urged his colleagues to note the disturbing development on the prevailing degrading condition in the various IDP camps, and added that “already we are losing so many of our children under five years to this extreme conditions in the affected areas.”

He stated that in spite of the earlier resolution of the Senate that raised the budget for the IDPs from N6billion to N10billion in recognition of the dire situation in the North East, the Presidential Initiative on the North East is yet to show tangible result on ground with half of the appropriated sum released.

“…Notwithstanding the huge budgetary allocation by the National Assembly, and the various releases by the executive…including significant donations from many donors, the situation on ground is not cheering,” he said.

He further called on the Red Chamber to be “worried that rather than use the money appropriated for the IDPs and the North East to ameliorate the problems, the focus of the disbursement so far made have been used to feather other interests.”

The Senator insisted that the “incoherent and largely fragmented state of procurement in the usage of the released funds so far points to a vague and corrupt scheme that is not in tune with helping our people in the North East  out of their present harrowing experience and misery.”

He added: ” the government has made concerted efforts at ameliorating the sufferings of the IDPs, some other people are working towards undermining same efforts; there are some allegations of diversion of 63 trucks of grains released from the strategic grain reserve allocated to IDPs in Borno State by the Federal Government.

“The gap in the state of affairs, where so much money has been made available by government with very little to show for it, has created and overburdened the cash strapped states and local governments in the affected states. Also, the intensity of the crisis was exemplified in August when IDPs took to the streets to obstruct vehicular movement and grounding business activities along the Maiduguri- Kano/Jos Road – the major road leading into Borno, to protest what they claimed was a shortage of food”, he stated.

Other Senators in their contributions to the debate on the motion, decried the pitiable plight of the IDPs and urged the Senate to stand up for the suffering, displaced persons.

Senate President, Bukola Saraki, in his remarks, lauded the sponsors of the motion and those who made contributions during its debate. He described the revelations emanating from the handling of the humanitarian  crisis as serious and portraying poor coordination, lack of transparency and slow response among those entrusted with the care of the IDPs.

“As a serious chamber, we cannot fold our arms and let these things continue to happen. This investigation, I believe, will give hope to the IDPs and the international community that the country is ready to do something to stop the diversion of aids and misapplication of appropriated funds meant for the upkeep of the IDPs,” Saraki said.