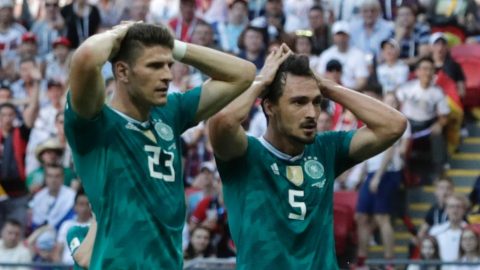 (AFRICAN EXAMINER) – Defending champions Germany have been eliminated from the ongoing 2018 World Cup tournament after losing to South Korea in Kazan.

The German machine was humiliated 2-0 by the ravaging South Koreans.

Then six minutes into stoppage time, with goalkeeper Manuel Neuer in the opponent’s’ half, South Korea gained control of the ball, launched it forward and Son Heung-min tapped into an empty net to score the second and seal Germany’s fate.

This is the first time since 1938 that a Germany or West Germany side failed to advance beyond the first round of the world football tournament, as Joachim Low’s side finish bottom of Group F.