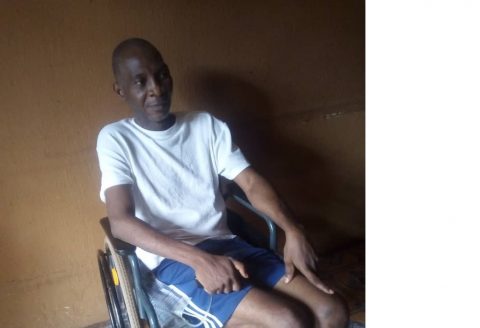 (AFRICAN EXAMINER) – A bedridden 54-year old Anglican Cathecist, Mr. Ubaka Chidiebere, from Oraifite, in Ekwusigo council  Area of Anambra State, South- East Nigeria, who has been on wheelchair since October, 2017 when he sustained a spinal cord injury in a ghastly motor accident, has appealed to governments at all level, governor Willy Obiano, wealthy spirited individuals, and religious bodies to come to his assistance, as he needs about five million naira N5,000,000.00 to undergo surgery.

The incident which also dislodged his waist has thrown him and entire family into suffering and agony, as they now find it difficult to afford one square meal.

Chidiebere, who managed to speak with newsmen weekend on his wheelchair said, Doctors informed him that for him to probably walk again with two of his legs, it is projected that about N5,000,000.00 would be needed for his surgery.

According to him, to make matters worse, his landlord at No 37 Amawbia Street, Uwani, Enugu, where he currently lives with his family, has threatened to eject him by the end of this month March, 2020, since he can no longer afford to  pay for his 4-bedroom apartment not to talk of raising the sum of N5 million to go for the surgery .

Narrating his sad story, Chidiebere , said until the fateful day, he was hale and hearty and had gone to St. John’s Anglican Church, Ogui Agu-Eke, Udi local government area of Enugu State, where they were preparing for Diocesan Women’s Conference the next day, but was involved in an auto crash along New Market area, Enugu, a development that has lunched  his life into penury, and agony, as  he has been  living on charity since the incident.

“On October 27, 2017, I was coming back from the church where I had gone for preparations for the Women Diocesan Conference that was supposed to hold on Friday.  By 5pm, I rushed back to Enugu and on my way back, the commercial bus we were travelling in developed a break failure and he tried to avoid an accident but hit a vulcunizer’s workshop instead which caused the vehicle to summersault.

“I was taken to Parkland General Hospital, Enugu and from there to Orthopaedic Hospital but was later directed to go to City Clinic, Dr. Owan’s Hospital.  I stayed there till July, 2018.  Because the hospital bill accumulated to about N4 million, I was discharged to avoid accumulating further.  My church paid N1,000,000.00 and he said I should be coming for checks from the house.

“After some time, I went to Unique Grace Hospital, Uwani, Enugu.  When the doctor checked me, he referred me to Melface Hospital where I had a scan but the doctor said that for me to walk again, they will need about N4 to N5 million for surgery,” he narrated from his wheelchair where fate has confined him to.

Chidiebere, who was emotionally down, lamented that he has three children and taking care of them is now a serious problem since he is not receiving any salary or stipend from any source.

“I have three kids and they are all in schools.  I have not been receiving salary or stipend since the accident. I only live on whatever the church gives me as well as what friends and relatives provide for me” adding that her daughter got admission twice into the university but could not enroll due to lack of finance.

“I am calling on good spirited individuals, churches, groups, governments to come and help me.  I have been given a month to vacate my accommodation because I can no longer pay for my four-bedroom flat,” he declares.

He appealed to anyone wishing to come to his rescue to make use of his account number domicile with UBA Bank, with details: Ubaka Chidiebere 2089709519.