Suu Kyi and the Burmese “Spring” By Reuben Abati 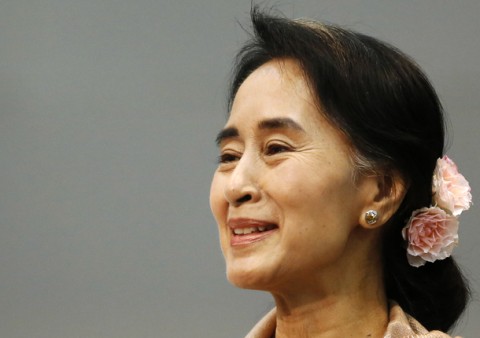 Aung San Suu Kyi writes in Letters from Burma:  “I have never ceased to be moved by the sense of the world lying quiescent and vulnerable, waiting to be awakened by the light of the new day quivering just beyond the horizon…”  That new day and awakening arrived on November 8 on Burma’s (Myanmar) 2015 election day and with the subsequent announcement of the final tally of the election results. But something even more remarkable happened. The military leaders have congratulated Suu Kyi and her party. The elections have been adjudged free and fair.

The ordinary Burmese who trooped out in large numbers as early as 6 am to vote, are excited. It is tempting to conclude that Burma has just had its own equivalent of a Spring! The people wanted change. They have voted for it. Aung San Suu Kyi is the symbol of their hope, the irrepressible icon of their struggle. The people of Burma have shown that if they are allowed to speak, they will speak clearly about what they want. The powerless of Burma have found power at the polls. It was a vote not necessarily against incumbent President Thein Sein whose reforms have further opened up Burma and made change possible, but a referendum on years of corrosive military repression.

The ruling party, the Union Solidarity and Development Party (USDP) lost in its strongholds, military-backed candidates accepted defeat and even organized parties for the triumphant opposition. When the new government is formed, next year, over 100 former political prisoners will sit in parliament. And the spirit behind all of this is Aung San Suu Kyi, the venerated daughter of General Aung San. There is in the process that has just begun in Myanmar, (it is another beginning really), a touch of the ironic and the pleasurable.

But perhaps in the long run, a major aspect of modern Burmese history will come down to who between General Aung San, and Aung San Suu Kyi, his daughter has had the greatest emotional, political and spiritual impact on this South East Asian nation.  The former negotiated Burmese Independence from the British and helped establish the modern Burmese army. The latter, ever so proud of her father’s legacy and conscious of his spiritual hold on the Burmese psyche, has led the struggle for a certain kind of independence from a successor patrimonial military which has held the country hostage since 1962. Aung San’s daughter was over the years, rewarded with house arrest, harassment, vilification, detention and ugly name-calling.

In 1990, the National League for Democracy, which she founded and led, was denied victory at the polls. But Daw Suu Kyi has seized the Burmese public imagination in a manner that no one else has since her father’s time. On November 8, she led the NLD to the polls again, and has won a landslide victory over the military-supported ruling party, winning 387 of all 498 seats, with a majority in the Upper and lower Houses and across states and regions.  This has brought so much excitement across the world. The winners are the people of Burma, for whom The Lady and the Golden Peacock (the NLD emblem)  are the symbols of redemption.

The ruling party induced voters; still they voted according to their conscience. Burma’s rulers have congratulated Aung San Suu Kyi, with the attendant politesse about “reconciliation” and “accepting the people’s desire”. But all of that is the easy part. What has happened, despite the euphoria is a case of deferred democracy, given the in-built contradictions in the Burmese brand of democracy.  The irony is that the change that the people have voted for may raise their hopes, but the reality of Burma’s complex politics may not deliver the prospects they seek. Voting for change is not enough, ensuring the substance of that change is the hard part.  This is the reality today in Burma, as much as it is in Nigeria where the complexity of political change has a special and felt resonance.

It will most likely take a much longer time before democracy takes root in Burma. Elections may be substantially free and fair and the people may have spoken their mind, but five decades of military hegemony, transformed into a culture of praetorianism is the biggest threat. Burma’s military leaders have imposed on their country a unitary system that effectively puts the military in charge of the key aspects of the state, including internal security, justice, and a veto power over the Constitution. They have created a system, which ensures that they are in no way answerable to any civilian. They get 25% of the seats in parliament, not through the ballot but automatically, and they reserve the power under the Constitution to veto any legislation.

Their excuse, for five decades has been that this is a “disciplined democracy”, to protect Burma from intrusive external influences, and ensure national unity and solidarity. But the same military establishment has failed to build institutions or encourage practices that will achieve unity or sustainable development. The economy is poorly managed, human rights abuses are prosecuted as state policy, and after decades of civil war, Burma remains sharply divided along religious and ethnic lines.

The people of Burma have demonstrated in 1990 and now again in 2015, that they will like to be masters of their own destiny and not be teleguided by the military. Until the tension between freedom and control in Burma is resolved and the people’s will is allowed to prevail, there can be no real democracy. And this is why the international community must continue to insist on true democratization in that country. Mere civilian presence is certainly not democratic control. The Constitutionalisation of military domination is as ominous as the overt intrusion of the military and security forces into the political process and the policy centre: another point that should resonate well in our own context in Nigeria.

In Myanmar, the shape of things to come is already evident. Aung San Suu Kyi is leader of the NLD, but she cannot be President. Article 59(f) of the 2008 Constitution, deliberately inserted to stop her from ever becoming President bars anyone who is married to a foreigner or has children with foreign citizenship from occupying that office. Suu Kyi’s late husband, Michael Aris and her two sons are British. The making of laws to achieve the purpose of either vendetta or exclusion is a feature of dictatorships. Burma’s Constitution is at variance with the people’s hopes, expectations and sovereignty. Only a people’s constitution will signal a new beginning. Given the present situation, how Suu Kyi and her NLD manage their relationship with the military will determine whether the events of the last week are real or illusionary and whether the new parliament will be the engine room of democracy or change or the decorative assembly that the old guard has made it.

Suu Kyi will remain the major factor as she has been since she went into partisan politics in 1988. She has waited for so long for this new day and she has left no one in doubt that she intends to exercise power and authority. She intends to be “above the President” in her capacity as party leader. “I’ll take all the decisions”, she has declared. A figure-head President under the watchful eyes of a superior leader could be an arrangement for instability, or distractions as has been seen previously in Indonesia and Malaysia. Suu Kyi, also referred to as Mother Suu Kyi must guard against the contradiction of being a symbol of democracy and becoming at the same time, a parody of her former tormentors. It is important not to promote provocations.

It is certainly still a long road to travel in Myanmar; as winter endures, the people hope for decent survival, a better economy, respect for human rights, including minority rights, a good life, in an open society. Whatever happens, the example of Aung San Suu Kyi: how an innocent woman became one of the most fiery defenders of the powerless in human history, will continue to inspire both men and women across the world. When will Nigeria produce our own San Suu Kyi? Or Indira Ghandhi? Or Hillary Clinton?