The Exit of Nelson Mandela of Africa

Death is never a thing of joy. Hence the icon of Africa and a world leader by all indicators, Nelson Mandela and former President of South Africa, though lived to be 95 years old before he passed to the beyond the news of his death is with great sadness to us. Nelson Mandela was well known, not for his many travels or the number of his domestic and foreign accounts, nor because he ruled his country half his lifetime, nor because of the mansions owned by him across the globe. He would remain celebrated because of his deeds, his beliefs, his actions and his endurance. 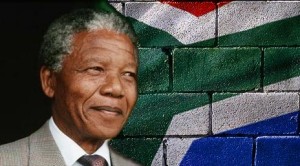 Ninety five years in any part of Africa is quite long where the life expectancy is generally hovering only around 50 years. The extra apartheid burden laid on him by his birth and environment was enough to kill him earlier. He went through it while many of his colleagues perished in the struggle.  For the average African the Bible seventy years is still a huge task to attain because of the poor environment, low education, lack of proper healthcare and generally absent government functionary to improve our life. Mandela was therefore a very favoured individual of this generation. He was not only a victim of the apartheid political system of his days but his later life and achievement came from his vision to run a struggle against that barbaric  and evil system. The struggle he led in Africa was the same that killed Martin Luther King in the United States of America and many of Mandela’s co-travellers.

Unfortunately this struggle is only just beginning rather than ending but we must recommend the weapons of peaceful protests, perseverance, total commitment and love for humanity that Nelson Mandela or Martin Luther King had used successfully in their days. The evil of inequality of opportunities, inequality of access to national wealth resources, inequality of ability and opportunity to participate in national life, this evil of inequality is same as what Mandela fought against. For example in United States of America, Russia, Frances, South Africa, and many others including Nigeria less than 5% of the respective population owns more than 90% of the wealth and other opportunities therein in the community. The world is faced with new forms of slavery whereby several women and less able people could be chained and enslaved in the streets of London or cities in the United States of America and other societies that pride themselves as vanguard of civilization. This modern slavery and modern apartheid affect more people today than Mandela’s days. Everyday Africans in particular risk their lives across the deserts and the Mediterranean Sea to steal themselves away from the harsh African economic only to be voluntary slaves anywhere in Europe, China, Russia, USA and beyond; that is if they make it across as many die on the process. A number of nationals especially Africans and Asians are wasting away in Saudi Arabia and many parts of the Arabian enclaves. There must rise up another Mandela to fight the evils of our days.

We would recall that Nelson Mandela had guided South Africa from the shackles of apartheid to multi-racial democracy and became an international icon of peace and reconciliation in that process before he died Thursday December 5, 2013 at age 95. The struggle Mandela started in South Africa and went to jail severally and long castration in solitary Islands is a legacy that should be carried on. Mandela’s vision was saintly, necessary and he was successful. Hence his passing away is a celebration of his life even while we send condolences to his families, government of South Africa, all people of African descent, and the entire world.

The government of South Africa and her people must immediately send the necessary signals to ensure the rest of the world that South Africa will not be allowed to go up in flames as many have predicted because we have lost the guide and captain of the ship. This is neither discrediting South Africans nor her Government Institutions but to allay fears in the hearts and minds of people. It is difficult for anyone to find a South African that can easily enter Mandela’s shoes right now. His colleague like Arch Bishop Tutu is already too old. We may also want to recall that although Mandela was imprisoned for nearly three decades for his fight against white minority rule, Mandela emerged determined to use his prestige and charisma to bring down apartheid through peaceful methods and avoiding a civil war and racial wars. At a time like this the government of South Africa and her people need to re-assure all the different ethnic groups and races of her commitment to equal opportunity and a level playing field for all.  Even as we write only a few blacks have moved to positions of advantage in education, economy in the social ladders. Hence it will still take a compromise amongst the colours to create the genuine mix we expect.

The desire of Mandela for the people of his nation may be found in his acceptance speech on becoming South Africa’s first black president in 1994. He had said, “The time for the healing of the wounds has come. The moment to bridge the chasms that divide us has come. We have, at last, achieved our political emancipation”. These statements must be allowed to take their true meanings on the ground in the polity and social live of every South African.

Perhaps there is still a single worry for us about Nelson Mandela and all other world leaders who may have achieved so much for their people. The worry is what happens to them in the beyond. Have our good leaders been so engrossed with political issues and left their own families or even their soul’s need unattended to? Do they know that this world is not the end of the drama and that there is just may be another one where they may no longer rule over us? Do they know that they may gain the entire world but miss the most important era to come? In this world of extreme and excessive  secularity of all kinds, where our leaders pass any law, implement any agenda under so called social liberalism or accepting any social behaviours in our society, they cause us to doubt the end which should be our main focus.

Mandela was simple enough. He remained committed to those who saw him through his dark days in Robin Islands even when the characters of some of his allies were in question. He was a determined man of faith in his mission and careful enough not to be misinterpreted either in deeds or actions. Surely Africa has lost the best gem of our time. We shall pray and let Nelson Mandela’s gentle soul rest in peace.