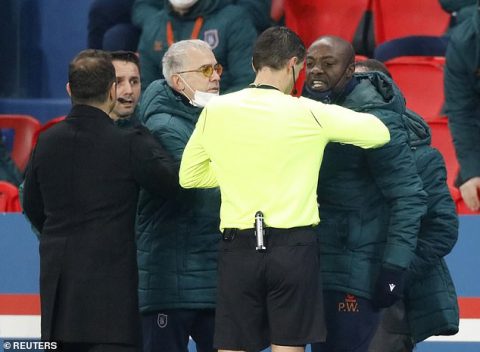 (AFRICAN EXAMINER) – The Champions League clash between Paris Saint-Germain and Istanbul Basaksehir was abandoned on Tuesday night after both sets of players walked off amid allegations of racism by fourth official Sebastian Coltescu.

The Group H encounter was suspended midway through the first half after an incident on the touchline involving Pierre Webo, Basaksehir’s assistant manager.

After a lengthy delay at Parc des Princes, the game was eventually called off and the remaining minutes will now be played on Wednesday at 6:55pm local time with a new refereeing team in charge led by Holland’s Danny Makkelie.

There was speculation that the match would restart at 10pm local time but PSG players were left waiting for the Turkish side in the tunnel.

Basaksehir players were reportedly refusing to restart if Coltescu continued to participate in the match as a VAR official.

A new fourth official on the touchline would have required Coltescu to continue as a VAR with UEFA rules demanding two officials be in the video review area. However, there was nobody else to fulfil the role.

According to RMC, Demba Ba and Marquinhos planned for both teams to walk back out onto the pitch, hand in hand.

But a number of Basaksehir players were against the idea and they were later seen leaving the stadium and boarding the team bus to return to their base for the evening.

Former Chelsea and Newcastle striker Ba was at the forefront of the Turkish side’s protests before they left the pitch, demanding an explanation from Coltescu for his language.

Ba, a substitute for the Turkish side, charged in the direction of Coltescu to question why he had used the phrase to identify Webo.

PSG players immediately followed their Turkish counterparts down the tunnel with the game at Parc des Princes suspended at 0-0.

Neymar, Kylian Mbappe and Marquinhos were all seen on the touchline in discussion with Coltescu. Basaksehir coach Okan Buruk could be heard yelling ‘you are racist’ to Coltescu.

Within minutes of the incident, Basaksehir’s Twitter feed posted a picture of UEFA’s ‘No To Racism’ campaign.

‘We are unconditionally against racism and discrimination in sports and in all areas of life,’ he wrote.