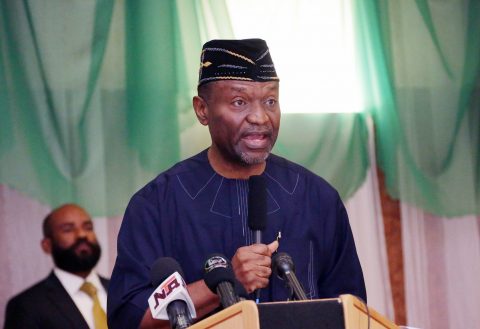 BALTIMORE, MD (AFRICAN EXAMINER) – Budget and National Planning Minister, Senator Udoma Udo Udoma has appealed to international agencies to assist Nigeria’s drive for self-sufficiency by encouraging the local production of items required for the execution of their mandates in the country.

Senator Udoma who was speaking at a meeting with the Executive Director of the United Nations Population Fund (UNDPA), Professor Babatunde Osotimehin and his delegation from the agency’s office in New York, at the weekend in Abuja, said Nigeria has the human capacity to realize the objective but needed support and patronage to drive the process.

As part of plans to achieve self-sufficiency, the Minister said government is focused on encouraging small and medium scale industries and promoting Made-in-Nigeria goods because there is a lot of scope for production and expansion. “It is important that we support them and patronize them and help them improve on the quality of goods produced in Nigeria”.

The Minister told the delegation that there is no reason why we cannot manufacture most of the drugs and other medical accessories needed in the treatment and control of maternal mortality and other related medical conditions and would appreciate assistance more in the area of production of those materials locally.

Whilst thanking the donors for their continuing contributions to improving health in Nigeria, he asked them to consider sourcing as much as possible, locally, so as to support local manufacturers.

Over time, with local sourcing, he stated, Nigeria can achieve self-sufficiency and reduce dependence on development partners for assistance.

Senator Udoma said government places premium on the country’s human capital which is also a veritable wealth resource; and its policies seek to promote the development of human capacity with focus on good health, which is an important aspect of the human capacity index.

He pledged the Ministry’s readiness to work with international development partners and other relevant Departments and Agencies within the country towards reducing the rate of maternal and infant mortality in the country.

Osotimehin had informed that while Nigeria’s population is about two percent of the world’s population, the country accounts for about ten per cent of the global maternal mortality ratio; a statistic the Minister described as alarming and unacceptable.

“We will certainly support all the initiatives aimed at reducing the figures. We will certainly work with you in collaboration with the Ministry of Health to bring that number down.”, he said.

The Minister said that although government was going through difficult times financially, the health of its citizens cannot be compromised; which is why it would appreciate every assistance from development partners to ensure the situation is speedily arrested. It would also be given serious consideration in the 2017 budget, he indicated.

“In terms of the budget, luckily we are on it right now, so we’ll see what we can do in that direction; but I think that it will continue to be helpful, and useful, to receive external support because, given the country’s current economic circumstances, resources are very limited. Ultimately, our aim will be to achieve self-sufficiency, but in the short term, we will continue to need resources from your organization, as well as those of other donors”, he stated.

He expressed government’s gratitude to the UNPFA and other development partners for their developmental activities in Nigeria to promote universal access to sexual and reproductive health, promote reproductive rights to reduce maternal mortality and accelerate progress towards the achievement of ICPD’s Declaration for sustainable growth.

Osotimehin, who was also accompanied by officials from DFID and USAID, was worried that the population of Nigeria was growing uncontrollably and health facilities were being overstretched leading to avoidable deaths, particularly birth-related incidences.

He said the uncontrolled reproduction regime also fosters the alarming rate of maternal mortality, a development he said should be arrested immediately if the country was to see meaningful and sustainable growth and development.

The UNDPA Director suggested immediate provision of universal access to information that will allow women make choices about how they want to live their lives and how many children a family should conveniently have for health and economic reasons. Efforts should be made to significantly improve the supply chain system that will ensure that provisions made for health purposes reach the last man in the form intended.

While appreciating that there are moral and cultural obstacles, Osotimehim said those in positions of authority should try as much as possible to educate the people on the health and economic implications of uncontrolled child bearing.