Why South African Women are Crazy About Nigerian Men -Study 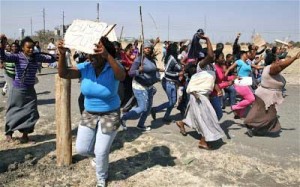 South African women tend to be in hot chase for Nigerian men due to their astoundingly “well-endowed” nature and unique sexual prowess, a study conducted by the University of Witswaterrand has revealed.

The study which was conducted on the seemingly booming business of penis enlargements through traditional medicine in Johannesburg by researchers from the university, disclosed that Nigerians are leading the way with penis size, followed by two other ethnic groups in South Africa, the Vendas and Tsongas.

The result of the study which was presented recently at the university’s Body Knowledge International Conference, noted that the ubiquitous presence of posters advertising Penis Enlargement products all over the city of Johannesburg puts the spotlight on the male body, focusing on an organ widely regarded as the very seat of manhood.

By suggesting a need to enlarge the penis, the study added, the posters bring up thoughts of male vulnerability, as seen through the fact that most of the posters advertise penis enlargement alongside finding a lost “lost lover”.

Most male respondents, according to the findings of the study, agreed that when it came to penis size, Nigerians were in the lead. However, most Nigerian respondents cited sexual stamina, “care” and material comforts as reasons why women are drawn to them.

Meanwhile, some women said they were tempted to try “big” ones and that “big” was not the preserve of Nigerians as the Vendas and Tsongas, according to them, were not doing badly with size as well. Similarly, few female respondents admitted that they had, had sex with Nigerians, but some said that big penises can be painful during sex.

Other Nigerian respondents, according to the report which was published in Mail & Guardian newspaper, further explained that it was their sexual performance, rather than the size of their penises that make them sought-partners by South African women. However, all male respondents agreed that there was a big size similar to that of a donkey or a horse. Some said there are guys endowed with shovel-like penises.

Although most men, according to the report, believe that “bigger is better”, Nigerians focused on their sexual stamina and the way they take care of women, especially in terms of love and financial support.

According to them, they were not stealing anyone’s women as insinuated in some quarters, but the women prefer and choose them because they strongly believe that sex, love and money go together, adding that it would seem that manhood is not, for the most part, about the size of the man’s penis, but what he does with it and what he offers in exchange.

On the question of what makes Nigerian men perform so well, the study said a wholesome diet of “Nigerian food” as opposed to a Southern African diet that often kills the libido, according to Nigerian respondents. Three things to avoid, some Nigerian men suggested in the study, are too much sugar, fat and alcohol, all of which “kills” a penis.

While lending credence to issues relating to sexual stamina and the tender loving care (TLC) of the average Nigeria guy, one respondent, according to the report said: “There is a saying in my country that you can put a small pepper (chilli) in your mouth, but it can make you open your mouth for the next 30 or 40 minutes. Some penises are small, but what they do there is more than what the big one is doing”.

On the contrary, female respondent said small penises were “like a teaspoon in a big coffee mug” or “as small as my little finger”. Some were, the report added, more expressive, saying: “Yes, there is small. You ignore it when it’s not erect and think it’s coming (growing bigger as it becomes erect) and then it grows and you’re like no… where’s the rest of it?”

Meanwhile, in their submission, most male foreigners interviewed during the study, insisted that South African women were after them because of their sexual stamina and ability to provide companionship.

One Zimbabwean emphatically said: “If South African men are giving you hell, you can take it out by pleasing their women.