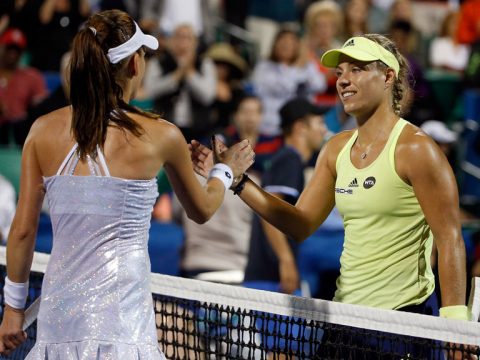 BALTIMORE, MD (AFRICAN EXAMINER) – The world number one Angelique Kerber is to play with Agnieszka Radwanska in the last four WTA Finals.

Radwanska who is the defending champion overcame Finals debutant, Pliskova in 78 minutes.

According to BBC, Radwanska had match point in her group-stage defeat to Kuznetsova earlier this week and the world number three looked in good form as she racked up a seventh successive straight-sets win over Czech Pliskova

In French Open champion, Garbine Muguruza avoided a whitewash at the event as she defeated Svetlana Kuznetsova 3-6 6-0 6-1 in their dead rubber.

Russian Kuznetsova was already through as the group winner with Muguruza sent out after defeats in her first two matches.

Kuznetsova, who is still savoring victory at the Kremlin Cup in Moscow on Saturday, will meet world number eight, Slovak Dominika Cibulkova in Saturday’s other semi-final.