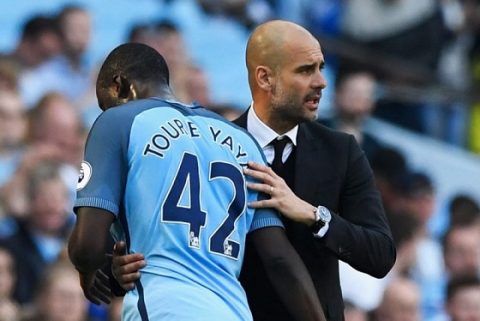 The Ivorian, who left City in May after eight years at the club, says he wants to “break the myth” about Guardiola, whom he describes as “jealous”.

“Maybe we Africans are not always treated by some in the same way as others,” said Toure in an interview with France Football.

This summer they are set to sign France-born Algeria international Riyad Mahrez from Leicester City.

Toure, an Ivory Coast international, played for Guardiola at Barcelona for two seasons until he was sold to City in 2010 for £24m.

He won six major trophies in England but started just one Premier League game in City’s latest title-winning campaign – their final home fixture of the season against Brighton.

Prior to that game, Guardiola said: “Yaya came here at the start of the journey. Where we are now is because of what he has done.

“The Brighton game we will give him what he deserves, one of the most beautiful farewells a player can receive.”

Toure completed 86 minutes against Brighton, having featured for 142 minutes in the league prior to that this season.

He believes that was “not down to physics”, saying he sought data from the club’s trainers to compare himself to younger players.

Guardiola won six league titles as a player at Barcelona and has added a further seven as a manager during spells with the Catalan club, Bayern Munich and City.

Toure said: “I do not know why but I have the impression that he was jealous, he took me for a rival. As if I made him a little shade.

“He was cruel to me. I came to wonder if it was not because of my colour.

“I am not the first to talk about these differences in treatment. In Barca, some have also asked the question.

“When we realise he often has problems with Africans wherever he goes, I ask myself questions.

“I want to be the one who breaks the myth of Guardiola.”

Toure started 22 league games under Guardiola in the 2016-17 season, and says he was asked to stay for another year, but then used sparingly./BBC