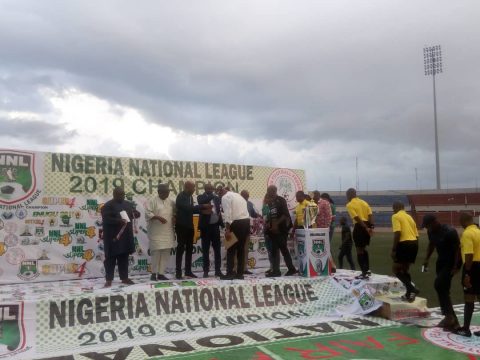 The team defeated Adamawa United FC by 2 – 0 in a tension soaked tactical match.

African Examiner Sports reports that the 1st goal of the match came via an own goal by Daniel Nanushi of Adamawa United who kissed their  own net at the 32 minute; while the second goal came through a header after a corner-kick by Utibe Arit at the 68 minute.

Speaking to newsmen at the end of the 90 minutes encounter, Chief coach Akwa Starlets,  Caleb Osu, said that the win and lifting of the trophy was a dream come true “since we prepared seriously for it, while God in His mercy gave us the victory’’.

The excited Coach  noted that he had a young and promising team that have a long way to go, adding, “We will also go to the drawing board to fix lapses in the team ahead of the 2019/2020 Nigerian Professional Football League (NPFL)’’.

Bello Muhammed, Coach of Adamawa United, in his reaction said  that the tournament was a very good test rehearsal for his team ahead of the NPFL season.

“We are going home to fortify and prepare for the NPFL season ahead, since the tournament had given the team a test of what the up-coming NPFL league will look like,’’ Muhammed said.

Addressing a press conference earlier weekend, at the Nnamdi Azikiwe stadium ahead of the tournament , Chairman of NNL, Hon. Chidi Offo Okenwa, had  charged the participating club sides to play according to football rules and regulations, expressing delight that the four clubs had done well to reach this level.

He explained that  the tournament was to liberate and repackaged the four teams for the apex league.

According to him, “we are organising this tournament to liberate and to repackage the four teams that qualified to the Nigeria Professional Football League (NPFL).all this is to ensure they do not drop back in as much as we are going to miss them next season. They ought to beat the drop to show the strength of NNL.

Okenwa who is also a board member of the Nigeria football federation NFF, and chairman Enugu state football Association,  said that the teams had been given the tips of how NPFL looks like and that he has the confidence that they will surmount the task when the league begins.