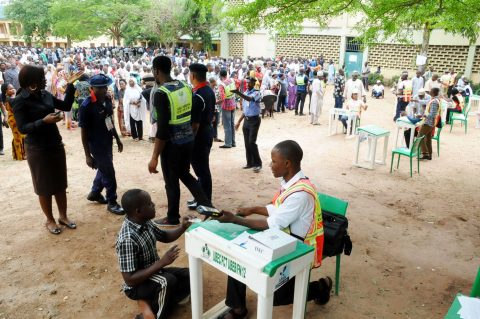 The parties’ flag bearers insisted that the 24th December date for the exercise is unacceptable to them, as it is always a busy day for people preparing to travel to their respective villages for the celebration of the Christmas and New Year festivities.

The candidates equally complained bitterly about the high fee being charged by the state electoral body for the election.

ABSIEC had recently announced that while the main poll will hold on Saturday 17 December 2016 and the results announced the next day being Sunday, a possible run-off would follow a day to Christmas, being 24th December, popularly called Christmas Eve.

The candidates rejected the run-off date Monday after a meeting by political parties and other stakeholders held with the Chairman of ABSIEC, Retired Justice Igbozurike Akomas, where he announced the proposed dates and other arrangements for the election.

Despite the complaints by the candidates, Justice Akomas insisted that the election “is in line with the provision of the Abia State Local Government Law of 2002, Subsection 154 (f) and (g), which empowers the Commission to prescribe fees to be deposited by the chairmanship and councillorship candidates.”

According to him, while chairmanship candidates are to pay a fee of N500, 000 each, the councillorship candidate will cough out N200, 000.

Besides the high fees, there is an additional payment of N15, 000 as administrative fee to be payed directly into the Commission’s account.

The ABSIEC boss, added that candidates for the Local government election are to be screened and cleared by security agencies and the state Board of Inland Revenue.