“Anambra Guber Election is Chris Ngige of APC Against Abuja” 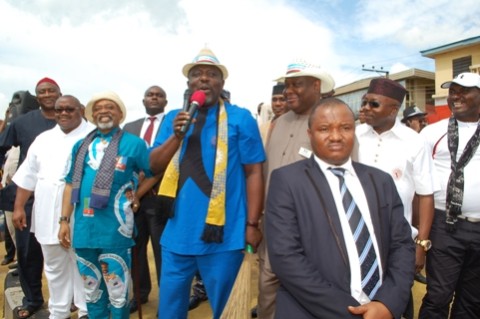 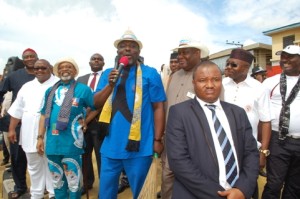 Imo state Governor, Rochas Okorocha Tuesday declared that the battle for Anambra gubernatorial polls  come November this year is between Senator Chris Ngige and seat of power in Abuja, insisting that victory must go to the people and not to Abuja.

The Governor, spoke at the inauguration of the National Committee for Senator Chris Ngige Campaign held at Emmaus House,Awka, the Anambra state capital.

One time National Secretary and erstwhile governorship candidate of the defunct All Nigerian Peoples Party (ANPP) Chief George Muoghalu emerged as the Director-General of the Chris Ngige total campaign.

The main assignment of the National Committee is to ensure free and fair elections on November 16, 2013.

Addressing the  crowd, Okorocha and Ngige vowed that the party would reclaim Anambra State come November, and would  restore its  lost past glory.

The Imo Governor, who is  the leader of Ngige campaign with governor  Adams Oshiomhole of Edo State,  Rauf Aregbesola of Osun State and Sani Al-Makura of Nassarawa State as  co-leaders, said the race for Anambra State government House should be seen as that of Ngige and Abuja.

He however, blamed the problems of Anambra State and crisis in political parties in the state to external influences, saying Anambrarians should resist godfatherism and moneybags whom he said would always milk the state dry.

Ngige in his speech, noted that the call for voluntary donation to his campaign fund by the supporters and members of the public was unique and first time he was witnessing such.

He added  that he was encouraged by the gesture which he said was a consummation of contract between him and the electorate.

The senator, expressed happiness with what Okorocha is doing in his state, assuring that he would replicate similar revolution in the State if voted into power come November.

The event, witnessed spontaneous rush by supporters, including widows to voluntary donate for the  actualization of Ngige’s ambition.

A widow, Madam Esther Onoli, who prayed over the cash collection stated that the token from the people would yield more money for the election.