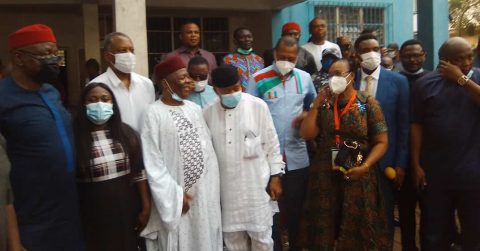 (AFRICAN EXAMINER) – The nationwide ongoing, All Progressive Congress (APC) membership registration/revalidation exercise has turned out to be a political blessing to the Enugu state chapter of the party, as it has reunited all warring groups who have resolved to work together for the interest of the party.

Chieftains of the party who have been at logger head with each other made the resolution Monday during a stakeholder meeting with members of the state registration/ revalidation panel from its national Secretariat, led by Senator Jonathan Zwingina.

It would be recalled that since 2018, the party has been enmeshed in crisis, with the foreign affairs minister, Mr. Geoffrey Onyeama, backing a group opposing the reelection of the state Chairman, Dr. Ben Nwoye.

Although, throughout the period, the National leadership of the party recognises the Dr. Nwoye-led executive as the authentic structure of the party in the state.

However, the almost four years crisis could be said to have been laid to rest as Onyeama, and his group attended the stakeholders meeting held at the party’s Secretariat.

The Minister and his group had during the meeting attended by almost all it’s Chieftains recognized Dr. Nwoye as the State Caretaker Committee Chairman.

Onyeama, and other stakeholders, including former Senate president, Chief Ken Nnamani, spoke in one voice, at the meeting, saying the time of fighting was over.

They expressed their readiness to bury the hatchet and move the party forward in the state.

Addressing the party stakeholders, chairman of the registration panel for Enugu State, Senatir. Jonathan Zwingina had assured them that the exercise would be transparent and devoid of any rancour.

He said: “We have no hidden agenda, and the exercise is going to be transparent. There is nothing to quarrel about because the APC in Enugu State has the manpower to make things happen.

The committee chairman added that the registration materials would be disbursed in a transparent manner during the exercise.

Onyeama, said the time of fighting was over, stressing “we should not repeat the same mistakes of the past; united we stand, divided we fall. We should stand to be counted in the new APC in Enugu State.

“I’m here to make the naysayers know that we can work together.

The former Senate President, Chief Nnamani in his speech, said that the registration would be done at the polling units level.

According to him, the essence was to know how many of their members that were in each of the polling units across Nigeria.

“The journey to 2023 general elections has started. Go to your polling units to know how many members we have there.

“We introduced this method in order to disprove the idea that the APC is a northern party,” he said.

Also addressing the meeting, the immediate past governor of the State, Barrister Sullivan Chime and the 2019 governorship candidate of the party in the State, Senator Ayogu  Eze said they were happy that members of the party had reunite after a long period of crisis.