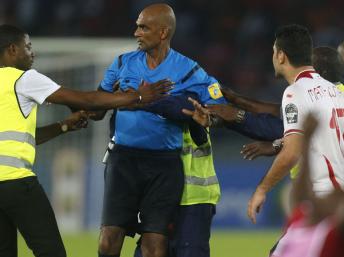 By Adeseye Adebiyi – The Mauritanian referee, Rajin Draparsad Seechum who officiated Tuesday match between Tunisia and the host of the ongoing African Cup of Nations (AFCON) – Equatorial Guinea has been slammed with a six-month ban from the Confederation of African Football (CAF) organized matches. 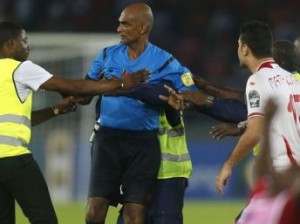 Mr Rajin Draparsad Seechum being Protected by a security official during the controversial match between Tunisia and host of the 2015 African Cup of Nations (AFCON) – Equatorial Guinea.

CAF sanction was announced Wednesday, over the award of a late penalty in favour of the Equatorial Guinea which earned them victory and eliminated the North African Tunisia from the nations cup.

Seechum awarded the penalty after Tunisian; Ali Maaloul was harshly ruled to have fouled Ivan Bolado when Tunisians were leading with 1-0 from the spot, via Javier Balboa.

Similarly, the Tunisian Football Federation earned a fine of $50,000 after their official confronted Seechum, accusing him and CAF of being biased.

In the same vein, CAF has demanded a letter of apology from the Tunisian Federation otherwise, provide irrefutable evidence to substantiate its fraud allegation or face expulsion from the 2017 AFCON tournament.

In the meantime, the Mauritanian referee name has been removed from the CAF list of elite referees, while the host country was also sanctioned with the fine of $5,000 for poor security at the stadium.