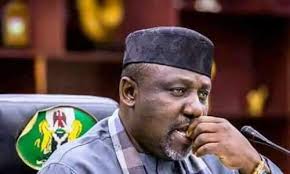 (AFRICAN EXAMINER) – An aide to Sen. Rochas Okorocha, Eberendu Chiimechefulem, his legislative aide, Steve Asinuobi and 12 others were arraigned before a magistrate’s court sitting in Owerri on Monday.

The 14 defendants were arraigned on a six-count charge bordering on conspiracy, breach of public peace, possession of firearms and unlawful destruction of the official seal of the Imo Government.

The   defendants were arrested on Sunday, February 21, for allegedly breaking into a premises sealed by the state government.

The premises known as Royal Spring Palm Estate is said to be owned by the wife of Okorocha, Nkechi.

The presiding magistrate, B.U Adikaibe, who ruled on the bail application made for the release of the defendants, granted them bail to the tune of N5m each.

The magistrate also insisted that a traditional ruler in the state must stand in as a surety.