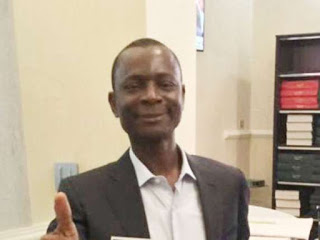 A High Court of the Federal Capital Territory (FCT) has berated the Economic and Financial Crimes Commission (EFCC) over the continued illegal detention of ex-President Goodluck Jonathan’s cousin, Azibaola Roberts for over 65 days without trial.

EFCC had on March 23, arrested Robert over alleged diversion of $40 million through One-Plus Holdings, a sister company of Kakatar‎ Construction and Engineering Company Limited, meant for securing oil pipelines.

Delivering a ruling on the application for the enforcement of his fundamental rights the court presided over by Justice Goodluck Olasunbor described the prolonged detention of Azibaola. Robert without trial as reprehensible and a conduct that smacks of anarchy.

“As an organisation that is set-up to enforce compliance with the law, the respondent must lead by example,” Justice Olasunbor said.

Visibly dissatisfied with the conduct of the EFCC, the court maintained that the anti-graft agency or any other security agency must obey a subsisting court order for the production of a particular suspect in its custody.

Justice Olasunbor noted that “the conduct of the respondent is unsalutory and condemnable. It undermines the integrity of the court and portends anarchy. ‎ No person being a natural or juristic person is greater than the court. All persons are subordinates to the rule of law.

“It is hoped that this rude conduct will never repeat itself. Let nobody pull the wool over the face of this courty,” Justice Olasunbor declared.

It would be recalled that Azibaola Robert had through his lawyer Chief‎ Chris Uche (SAN), approached the court for the enforcement of his fundamental rights.

substantive motion in this suit.”

The senior lawyer had submitted that the court was clothed with jurisdiction to grant the applicant bail having regard to Order 4 Rule 3 and 4 of the Fundamental Rights Enforcement Rules of 2009 as well as Section 168 of the Administration of Criminal Justice Act (ACJA), 2015 and Section 35 (5) of the 1999 Constitution of the Federal Republic of Nigeria.

In the suit marked: FCT/CV/1370/2016, Uche drew the court’s attention to the physical, mental and psychological torture his client had been subjected to in an underground cell of the EFCC since March 23 when he‎ was arrested, and urged the court to grant his client’s request.

Delivering a ruling on the application, the trial judge, Justice‎ Olasunbor had held that Robert’s detention by the EFCC for over two weeks was unconstitutional.

Justice Olasunbor had said that the applicant had disclosed sufficient evidence before the court to warrant the granting of his relief.

Relying on the extant provisions of the constitution, the judge averred that under section 35 (5) of the said provision, the constitution provides that a person who is under arrest or detention shall be brought before a court of law within a reasonable time.

Section 35 subsection 5, 1 defines reasonable time as follows: ‎ “In the case of an arrest or detention in any case where there is a‎ court of competent jurisdiction within the radius of 40 kilometres within (a) period of one day and (b) in any other case a period of two‎ days or such longer period as in the circumstance may be considered by the court to be reasonable.”

Justice Olasunbor further held: “flowing from the above provisions, and applying the intentions of the authors of our revered constitution in the instant scenario, the detention of the applicant for a duration of‎ 15 days as at today (Thursday, April 7), is far in excess of the‎ constitutionally provided time for detaining a citizen without his arrest or arraignment in a law court.

“This court has carefully examined Order 4 Rule 3 and 4 of the‎ Fundamental Rights Fundamental Procedure Rules 2009, there it empowers the court to entertain an ex-parte application for the prevention of

life or liberty of a Nigerian Citizen where exceptional hardship may‎ be occasioned before the service of the motion on notice.

“Applying the foregoing provisions as a litmus test to the facts and circumstances of this case, I am of the view and so hold that this‎ ex-parte application is competent and contemplated by the laws of our land. The applicant by this application disclosed that he has been in‎ detention since 23 March, 2016 in an underground cell. This in this court’s view amounts to a deprivation of his movement and his freedom contrary to the time frame stipulated in the 1999 constitution. I am of the view that the applicant has disclosed exceptional reason why this application should be granted. More importantly, order 4 rule 4 (1) of the fundamental rights enforcement procedural rules of 2009 empowers this court to grant bail or order the release of the applicant forthwith from detention pending the determination of the motion on notice.”

In the same vein, the court had ordered the EFCC to release Robert’s‎ colleague and Executive Director of Kakatar Construction and Engineering Company Limited, Mr. Dakoru Atukpa who had also been in detention for the same period.

Despite the foregoing court order mandating the anti-graft body to‎ release Mr. Roberts, the defendant is still being held without being charged to any court.