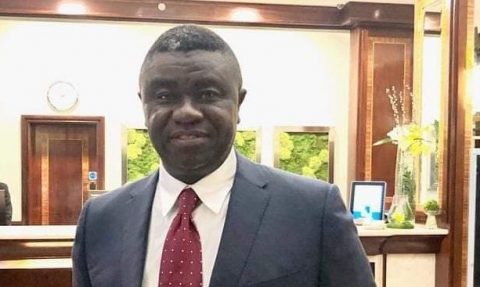 (AFRICAN EXAMINER) – The Federal Government has assured Nigerians and the international community that the domestication of the integrated Sustainable Development Goals (iSDG) simulation model in Nigeria was timely and would be used alongside other models to determine the size and scope of projects and programmes in the next national development plan.

Minister of State for Budget and National Planning, Prince Clem Ikanade Agba, disclosed this on Tuesday in his remarks on the SDG implementation process in Nigeria at the Nigerian high-level side event on the margins of the 74th United Nations General Assembly (UNGA) in New York.

At the event attended by President Muhammadu Buhari, the Nigerian delegation and members of the international community, Agba said “we are gathered at this side event of the United Nations General Assembly (UNGA) to affirm the domestication of the integrated Sustainable Development Goals (iSDGs) simulation model in Nigeria, a feat many countries in the UN family and indeed globally, have yet to achieve.”

He stated that the idea that was conceptualized two years ago was borne out of “the well-thought out desire to domesticate and customize the integrated SDGs Simulation Model to our own peculiar context”, adding that “this measure of success could not have been achieved without the firm support of President Muhammadu Buhari.”

Agba said that “in March 2017, Nigeria took a bold step on the journey to domesticating the iSDGs simulation model with the engagement of the Millennium Institute (MI), Washington, United States and the support of the United Nations Development Programme, Nigeria office.

“Our idea and strategy for domestication of the Model was to build local capacity by exposing the staff of key relevant Ministries, Departments and Agencies (MDAs) whose activities fall within the 17 SDGs to the use and operationalisation of the Model.

“However, this was achieved only when the iSDGs simulation model had been customised to Nigeria’s unique peculiarities through the technical assistance from the Millennium Institute.”

He added: “At the beginning of the domestication process in 2017, the model was anchored at the Nigeria’s Budget Office. It is gladdening that we now have the Model housed in the restructured Ministry of Finance, Budget and National Planning.

“So as a Ministry, we will like to reaffirm our commitment to judiciously utilise this planning tool, along with other existing tools, as we aim to revert to our well-known tradition of long-term National Development Planning.”

The minister said that the Buhari administration was presently in the process ess of developing a successor plan to the Nigeria Vision 20: 2020 and the Economic Recovery and Growth Plan (ERGP) 2017 – 2020 as both would terminate in December, 2020.

“The iSDGs domestication is therefore very timely as it will also be used alongside other models to determine the size and scope of programmes and projects in the plan.

“In furtherance of this, we have already integrated the main areas of concerns to the SDGs in the implementation of the ERGP and the next level effort is to mainstream the 17 SDGs in the Medium and Long-term plans that are in the pipeline.

“The essence is to ensure that full attention is given to the implementation of the SDGs programmes and projects in the course of implementing the plans.”

He further said that the domestication of the model to the sub-national levels of government would be hastened up to ensure that their SDGs programmes and projects were properly fed into the National Development Plan.

Noting that this would come with a huge cost in view of the size of the population and land mass, he solicited the cooperation and support of Development Partners to facilitate early coverage.

Agba expressed concern about the sustainability of the domestication and stressed the need to build institutional capacity to train Nigerians locally on system dynamics.

“To this end, it would be a positive effort for international agencies to partner Nigerian local institutions to mount short term programmes on the fundamentals of system dynamics and other related excel-based models so as to continually build the capacity of the MDAs and other private sector organisations that need such skills in the future,” he stated.

He declared that “Efforts would also be made to train the staff of the Macroeconomic Analysis Department on System Dynamics/iSDGs simulation model to equip them for the usage of the model for the preparation of development plans and subsequent building of the capacity of sub-national governments.”

According to him, “The report of the domestication of the model has revealed the likely level of attainment of the SDGs using particularly the present ERGP policies and the ERGP + SDGs policies.

“One important take away in the report is that there are certain goals that were not attained in the simulation even if we were to commit all our resources to it without taking note of issues of diminishing returns setting in, structural matters and the complementary nature of the goals to each other.

“This exposure would strategically strengthen our resolve to address critical issues to national development beyond financing.”

He stated that the issue of data has been highlighted in the report, adding that all data-producing and generating agencies would be galvanized to address the challenges posed by the lack of quality data.

“The issue of State GDP figures would also be tackled as it was evident in the report that the model would be unable to run or produce robust results without GDP figures and adequate data,” he added.