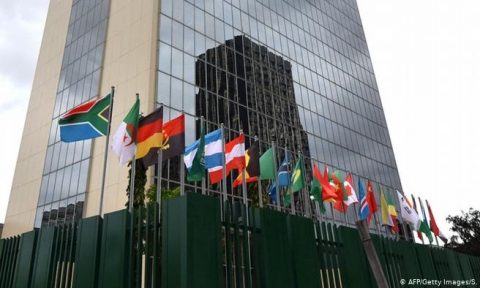 (AFRICAN EXAMINER) – A galaxy of eminent African and global leaders have applauded the successful launch of the Global Center on Adaption (GCA) Regional Office in Africa.

The GCA Africa which is hosted by the African Development Bank (AfDB) at its headquarters in the Ivorian capital Abidjan, will work with partners across the continent to scale and accelerate adaptation action that protects African communities from the impacts of climate change

The new office will also focus on programmes and action, knowledge acceleration and capacity building and agenda-setting that respond to the acute challenges from the changing climate facing African countries.

The GCA Africa programmes include improving the food security of one billion people in Sub-Saharan Africa by 2030 through a program on rural well-being and food security, as well as projects to support communities through water for urban growth and resilience; using nature for more resilient infrastructure; adaptation finance and building youth leadership.

Commenting on the launch today, Co-Chair of the Board of the GCA and 8th Secretary-General of the United Nations, (UN) Ban Ki-moon described it as a historic moment to accelerate adaptation in Africa.

Similarly, the Deputy Secretary General of the UN, Amina Mohammed stressed that there is an urgent need to step up the support for people in Africa, and around the world, affected by climate change.

“I welcome the Global Center on Adaptation Africa as a crucial partner in delivering the elevated ambition and enhanced action that is needed to make this shift towards a resilient future”, she added.

Also his remarks, President of the AfDB, Dr. Akinwumi Adesina expressed satisfaction on the inauguration of the GCA office domiciled in the bank’s premises, adding that  has committed to doubling its financing for climate to $25 billion by 2025, with over 50 percent devoted to climate adaptation

“I am delighted with the launch today of GCA hosted by the AfDB.  Africa must not be short-changed by global climate finance. We will partner with the GCA to mobilize more resources for climate adaptation in Africa”, he assured.

Speaking in a similar vein, President of Gabon and Chair of the African Adaptation Initiative, Ali Bongo Ondimba noted that the devastating effects of climate change, which include severe droughts, floods, reduced agricultural yields, sea-level rise, and other climate-related disasters, are on the rise.

“The launch of GCA Africa is a bold and innovative initiative to galvanize the support needed to significantly scale up adaptation on the continent, identify gaps and connect regional partners to find solutions”, he added.

In his contribution, the President of Ghana, Nana Akufo-Addo said adaptation to the impact of our changing climate is essential if Ghana is to continue to grow and prosper.

“We look forward to working with GCA and its partners to meet the challenge of climate change and ensuring resilience is built into Africa’s economic recovery plans”, he further stated.

The Managing Director of International Monetary Fund (IMF),Kristalina Georgieva observed that more than any other region, sub-Saharan Africa is vulnerable to the impact of climate change, which threatens lives and livelihoods and undermines economic growth.

“After the current crisis, boosting resilience is an urgent priority so it’s vital we share the knowledge and best practice that can help accelerate climate adaptation”, she added.

Co-Chair of the Board of the Global Center on Adaptation and Honorary Chairman of Royal DSM, Feike Sijbesma said millions of lives depend on Africa’s agricultural sector.

“Adapting and improving its resilience to climate change is therefore a must. By investing in African local food systems we catalyze sustainable value chains and support the vulnerable but small-scale often female producers”, he further explained.

Also in his submission, the Minister for International Development Cooperation for Sweden, Peter Erikson, noted that GCA is a key solutions broker and center of excellence with a holistic approach that aims to accelerate adaptation solutions for a climate-resilient future in Africa.

“By working with GCA Africa we will intensify climate adaptation efforts to ensure we integrate solutions to have a coherent response to our climate emergency”, he added.

Similarly, the Minister of International Development for Norway, Dag-Inge Ulstein said climate change is not only damaging for the environment but devastating also for development.

“It is important that countries around the world, especially our partners in Africa, work together to address these global challenges. Norway is pleased to be able to support GCA Africa in accelerating this agenda”, he noted.

Also in his remarks the Chief Executive Officer (CEO) of GCA, Patrick Verkooijen stressed that the impacts of climate change are already being felt across Africa and will only increase in magnitude.

“Adaptation is not a nice-to-have, it’s a necessity. Through our role as a solutions broker, GCA Africa will work closely with partners in every sector to ensure the most effective adaptation measures are shared and scaled across the continent, responding to the growing demand for strengthening resilience to the impacts of our changing climate”, he further declared.