Jonathan, Powers To Suspend CBN Governor And Other Issues

These days, it is common to glean in the newspapers and on the social media stories that look like President Goodluck Ebele Jonathan is persecuting the suspended Central Bank Bank (CBN) Governor, Sanusi Lamido Sanusi.  It is true that Sanusi did not help matters with the way he was going about his business of being the CBN Governor, and subsequently damaging the economy with his unguarded and less than sober comments in the open space.  But is that enough to suspend him so unceremoniously? 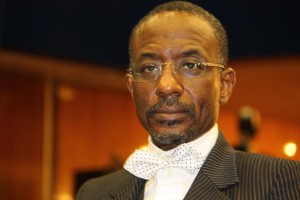 Let us not argue whether he was suspended or sacked, because it is obvious that by the time the investigations are concluded, his term of office would have run out; or, at least, he would be on his terminal leave.  We should not also argue whether Sanusi was hobnobbing with the All Progressives Congress (APC) chieftains while fighting the government of his boss, President Jonathan.  He was completely tactless on that score, because even his friend, Nasir el Rufai, never did that when he served Olusegun Obasanjo. Actually, he dared not.  He always fought his and Obasanjo’s enemies with single-minded focus.

It is also futile to embark on a back-and-forth discussion on why Sanusi kept boasting he was not interested in a second term, because latest revelations show that he knew that with the investigation by the Financial Reporting Council of Nigeria (FRCN), which he had been privy to at the time he made the comments, he was not going to get it.

Also, it will be an exercise in futility to determine whether or not he knew his jugular was exposed and embarked on a well planned “let-me-get-them-before-they-get-me” razzmatazz.  The man knew it; his strategists knew it; and they launched a pre-emptive strike.

(b)  Power to remove or suspend him;

(c)  Power, exercisable in the manner and subject to the limitations and conditions (if any) applicable to the power to appoint,-

(i)  To reappoint or reinstate him,

(ii) To appoint a person to act in his place, either generally or in regard to specified functions, during such time as is considered expedient by the authority in whom the power of appointment in question is vested.

As damning as the FRCN report may seem, it may be necessary to dissect the salient points dispassionately to see if the banker deserved what befell him from on high.  The first few comments by the FRCN on Sanusi’s response were indeed very harsh and an unqualified disaster on the competence of the big shots in the country’s regulatory agency on banking.  It stated that the explanation provided by the bank on the query from government was “a clear display of incompetence, nonchalance, fraud, wastefulness, abuse of due process and deliberate efforts to misrepresent facts on the part of the leadership of the CBN.”

And in a comment that questions the competence of the auditors to the country’s Central Bank, the FRCN was unsparing, noting that “the joint external auditors DID NOT certify that the accounts give a true and fair view of the financial position of the Bank as at 31 December 2012. Their opinion is a technical qualification that the accounts should not be relied upon for decision-making.  Their opinion was carefully crafted, capable of deceiving the uninformed and not in accordance with the International Standards on Auditing and the Financial Reporting Council of Nigeria Act No. 6, 2011.”

The Council called for a thorough investigation that would reveal whatever led the auditors to compromise their professionalism. On AMCON, where the CBN holds 50% share capital, the Council said it made a loss (after taxation) of N2, 439,701.422,000 (over 2.4 Trillion Naira) and also had a negative total equity of N2, 345.620.364.000 (over 2.3 Trillion Naira) at the end of 2011.  AMCON’s 2011 accounts was signed by its Board on 8 October 2012, adding that the CBN rightly explained that AMCON’s Bonds are gilt-edge securities of the government but did not disclose to the President that a large portion of this sovereign instrument is to mature by December 31st, 2013 and the inability of the government to fulfill the guarantee may affect credit risk rating of Nigeria negatively.

“The fact that it was not budgeted for in 2013 by the FGN coupled with the fact that the CBN was even expecting N713 Billion therefrom were enough reasons for the leadership of the CBN to have drawn the attention of Mr. President to the matter in accordance with Section 2(e) of the CBN Act, 2007,” the Council added.  After recommending for the President to do away with Sanusi and his deputies, the Council proceeded to justify its call for them to be booted out.

As noted in a Senate motion, which did not see the light of the day, the Council disclosed that the incompetence that swam freely in the CBN to the extent that it worked outside its primary mandates led to its carrying “out a number of activities, with significant financial implications, that are not within the principal objects of the Bank and that are clearly vested in well-established agencies and institutions of the Federal Government. For example, the CBN invoice payments to what it referred to as ‘Centre for Excellence’ (N2. 918 Billion in 2009, N 1.229 Billion in 2010, N7.3733 Billion in 2011 and N16 Billion in 2012 … even when its entire addition to the brought forward General Reserves Fund in 2012 was N16.031 Billion), Another sub-head is referred to as ‘Contribution to Internal National Security’ (N4.078 Billion in 2010, Nl8.35 Billion in 2011 and a hidden N0.125Billion in 2012).”

But perhaps the most sensational and mind-boggling of the saga in the CBN, besides the wastefulness that is generously explained in the report, is the alleged fraud perpetrated there.  For instance, the regulatory bank claimed it paid Nigerian Security Printing and Minting Plc (NSPM Plc) N38.233 Billion in 2011 for “Printing of Banknotes” whereas the entire Turnover of NSPM Plc (Group) is N29.370 Billion.

The report added that the CBN claimed that it paid Air Charter, such as paid to Emirate Air line (N0.511 Billion), Wing Air line (N0.425 Billion) and Associated Air line (N 1.025 Billion) to distribute currency by air nationwide.  According to the FRCN report, “Emirate Airline does not fly local charter in Nigeria; Wing Air line is not registered with Nigeria Civil Aviation Authority and Associated Airline does not have a Billion turnover for 2011 because, upon enquiry, the management claimed that they have no financial statements and have not had any significant operations, for the past two years, that will warrant preparation of financial statements.”  There are other areas of alleged fraudulent activities listed in the Council report.

Now that so much politics has been allowed into the mix of Sanusi’s misdeeds or otherwise, it will be difficult for the discerning minds to speak objectively without being labeled on one side of the divides, but watchers of the development believes that if these monumental, less- than-pure activities took place in the CBN, then a thorough surgical operation should be conducted, affecting not only Sanusi and his deputy governors, but also the directors who did not blow the whistle on their bosses.