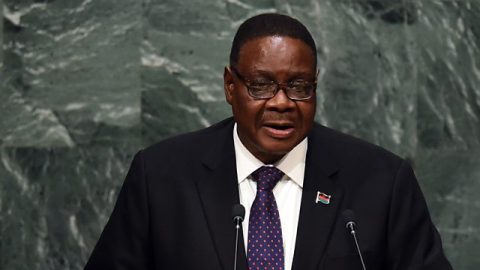 (AFRICAN EXAMINER) – Malawians headed to polling stations on Tuesday for presidential and legislative elections seen as a tough test for President Peter Mutharika, who is facing challenges from the deputy president and a former pastor who heads the opposition.

Malawi is heavily dependent on foreign aid and is frequently beset by droughts which threaten the lives of thousands of people.

Former law Professor Mutharika, 78, oversaw infrastructure improvements and a sharp reduction in inflation in his first five-year term, but critics accuse him of corruption and cronyism.

Reuters reporters saw voters casting ballots in Blantyre and Lilongwe, two of the largest cities in the Southern African country.

“I have a strong feeling that the choice I made will carry the day,” said Tima Nyirongo, a 31-year-old mother of two who voted at Chirimba School in Blantyre.

Polling stations opened at around 0400 GMT. Some 6.8 million registered voters will cast ballots for president, parliament and ward councillors, according to figures from the Malawi Electoral Commission (MEC).

He has targeted the youth vote with a vibrant social media campaign featuring hip-hop videos.

Chilima and Chakwera, 64, have both promised to crack down on corruption.

Chakwera lost out to Mutharika in 2014 elections and has formed an alliance with Mutharika’s predecessor, Joyce Banda, this time.

The AU on Monday stressed that its observers were set to inspect the credibility of Malawi’s tripartite elections.

Mahama arrived Malawi on Sunday ahead of the polls.

The objective of mission is to “make an independent, objective and impartial assessment of the May 21 tripartite elections in Malawi, in accordance with the national, regional and international standards for democratic elections,” the AU said in a statement.

According to the MEC, voters are casting their ballots for seven presidential candidates, 1,329 parliamentary candidates in 193 constituencies, and 2,709 candidates in 462 local government areas. (Reuters/NAN)