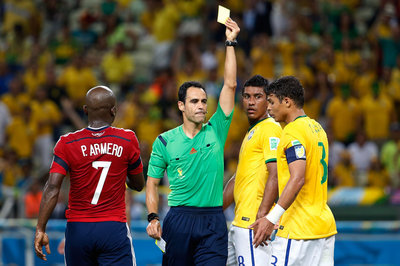 Colombian lawyer, Aurelio Jimenez has taken it upon himself to get justice on behalf of the entire globe by suing world soccer governing body FIFA for having bad referees at the 2014 World Cup in Brazil.

Jimenez, 74, has sued FIFA for €1 billion because of his emotional and physical distress. That includes being taken to the hospital with cardiac problems- ‘’distress’’ that referee Carlos Velasco Carballo caused– and thus, FIFA’s — fault. 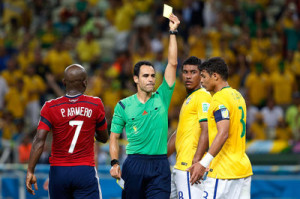 Carballo was the referee in Brazil’s quarterfinal win over Colombia, which saw both teams play very physically and Carballo come under fire for not getting the match under control. There were several bad tackles, many of them aimed at James Rodriguez, which caused Jimenez distress.

It is assumed that Brazil’s Neymar was also caused distress when Colombia’s Juan Zuniga kicked him in the back and broke a vertebrae, but the Colombians are the ones who were distressed.

“I decided to sue FIFA in the Colombian judiciary system because in the past world soccer championship in Brazil, there were many wrongdoings related to referees who damaged many countries and their selections, among them the Colombia team,” Jimenez continued.

Jimenez has said that if he wins his lawsuit, he will give the money to a government organization aimed at helping Colombian children, which is nice.