NFF, Watch Out For The Greenhorns; Upcoming Football Idols 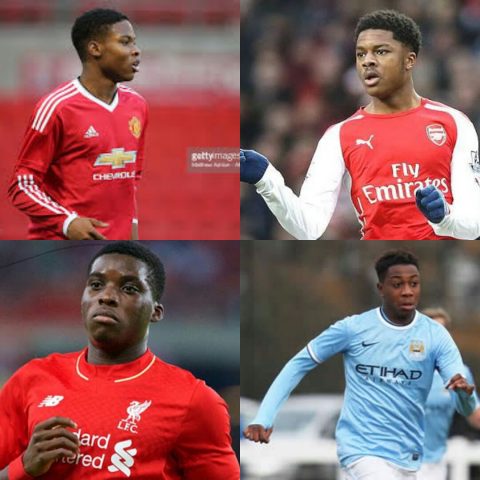 The lanky defender joined City at the little age of five and signed his first professional contract upon turning 17 in September 2014. The 18 year old’s confidence and leadership skill did not go unnoticed by youth team boss Jason Wilcox who made him Skipper of the under-18 side. Adarabioyo made his first-team debut in the FA Cup defeat to Chelsea at Stamford Bridge in February.

Another ‘Tosin’ for Nigeria; this is how he is described on his club’s website: “At home as a holding midfielder, Tosin Kehinde is an enterprising prodigy with bags of potential.” He was born in Lagos but raised in UK. He is known to be a clever ball passer and possesses good positional awareness. Now, he is still with The Academy, but it would be interesting to see how he develops with the Red Army considering the fact that he is about the first Nigerian to wear the colours of United at any level.


Those who saw the 18-year-old Ojo for the few minutes he was featured in the Premier League game against Chelsea when the season was coming to an end can testify to his talent. He started from the bench, but was actively involved in Benteke’s late equalizer. Having been loaned out to Wigan Athletic and Wolverhampton Wanderers in order to gain some experience, he was recalled by Jurgen Klopp’s Liverpool in January. Winger Ojo could provide healthy competition for the position in the national team. We already have the two Moses (Victor and Simon) and Ahmed Musa, but Ojo would be a great addition!

Having seen Jay Jay Okocha’s nephew, Alex Iwobi shoot himself to limelight this term, many would also expect 20-year old Akpom, who has been with the Gunners since he was six to be inspired by Iwobi’s sporadic development. From U16 to U21 levels, he has represented England, albeit like Iwobi, Akpom realistically could still be an Eagle. Four loans in three seasons should ordinarily leave Akpom with two options-Arsenal make him a core first team member or sell him. There should be no more loans for him!

The 19 year old defender joined the youth rank of Porto in 2014. Chidozie earned his maiden appearance in the Premeira Liga on only his second competitive game with the main squad and that was in the match against rivals, and eventual champions, S.L Benfica. His league debut was perfect as Porto won! The last few years have been blessing for Chidozie. This was a player who in late 2013 ‘struggled’ to have selfie with Super Eagles stars, John Obi Mikel and Victor Moses. Fast forward to 2016, he shares dressing room with the legendary Casillas.