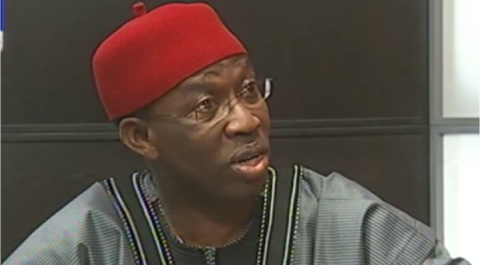 (AFRICAN EXAMINER) –  Gov. Ifeanyi Okowa of Delta has called on Nigerians to support the current call for ranching as against open grazing in order to permanently end the lingering herders-farmers clashes across the country.
Okowa made the call on Friday, when the National President of the Christian Association of Nigeria, Rev. Samson Ayokunle, paid him a condolence visit at the Government House, Asaba.
He said the time to rise against open grazing was now, following the northern governors’ open declaration for ranching as a modern cattle rearing method.
He regretted that insecurity in the country had negatively affected the socio-economic fortunes of Nigerians.
The governor said that one of the best ways to check the unfortunate trend was for herders to embrace ranching.
He further advocated the need to meaningfully engage the people in productive ventures through vocational and skill acquisition programmes to check insecurity.
He feared that banditry and other acts of criminality in the country might persist “unless unemployment is seriously addressed”.
“Here in Delta,  we  have long realised that the way to go is to find ways of enabling our people  to acquire needed skills because everybody cannot get white collar job.
“So, beyond vocational training, we have placed a lot of emphasis on technical education and we are doing our best to reach out to our youths.
“We are glad that many of our youths are cooperating with us.
“I am glad that many of my counterparts in the north are now beginning to look toward the development of our nation because they have spoken loudly in their last meeting concerning the issue of open grazing.
“We are glad to hear that because that has been the voice mainly from the South, which has now been echoed by our counterparts in t North.
“And I am truly very glad that they have boldly come out to speak about that because we must truly find ways to begin to encourage ranching.
He hoped that the Federal Government would accept the call for ranching, adding that it would enhance the nation’s livestock economy.
“Ranching will be in the best interest of all Nigerians because it will improve the family income and reduce insecurity in the land,” Okowa said.
Earlier, Ayokunle, who is also the President of Nigeria Baptist Convention, said he came to commiserate with the governor and his family over the death his father, Pa Okowa.
He expressed concern over the rising rate of insecurity in the country and urged those in government to take urgent steps to address the phenomenon. (NAN)