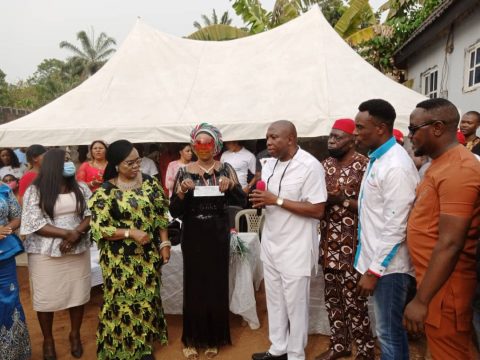 (AFRICAN EXAMINER) – The Commissioner, Federal Character Commission, (FCC), representing Enugu State, Hon. Mrs. Ginika Tor has declared that the ruling All Progressives Congress APC, has become a household name in every nook and crannies of Enugu state, and Southeast, Nigeria.

She noted that the overwhelming manner  people of the state  and South East in general have been embracing  the ongoing membership registration/revalidation exercise of the party indicates that APC is now generally acceptable by the people.

She spoke Sunday after revalidating  her membership of the party in the presence of party officials, including the chairman of the APC in Enugu State, Dr. Ben Nwoye, the  Chairman of the Membership Registration and Revalidation Panel for Enugu State, Senator Jonathan Zwingina who was was represented by Rt. Hon. Michael Ugwa, a former military governor (Milad) of Gombe State, Group Capt. Joe Orji, (rtd.), among others.

The Federal Commissioner, who carried out the exercise before a crowd of party members and supporters, said the people of the area were keen on identifying with the ruling party.

According to her, “You can see that the material given to us is already exhausted. Our people are happy with the APC-led Federal Government and that is the outcome of what you have seen.

“There has been massive registration since this exercise commenced, and that is why we are taking this opportunity to to request that at least two more booklets be given to us. It will not be right to deny anyone the opportunity to register with our great party,” she noted.

In his speech,  Hon. Ugwa, said  he was impressed with the massive turn out of party members at the event.

He, however, applauded  the Amoli  people for their enthusiasm over the registration, saying  Enugu people and indeed Ndigbo had every reason to be happy with the APC government.

“This is not a matter of sentiment; the indices are there to show that no previous government remembered Ndigbo the way this government has done.

“So, this is an opportunity for you all to be part of this moving train; our party is very serious about this exercise, which is very legal and legitimate. We want you to not just register, but be fishers of men for the APC, you have to go and get others; we have to populate this party.

He added that “we are talking about a Nigeria President of Igbo extraction but the only way we can show seriousness is by populating this party; we must become part owners of this great party, the APC.

The Enugu state Caretaker Committee Chairman of the party Dr. Nwoye, also urged the people to take full advantage of the registration to join the APC.