Governor Theodore Orji on Wednesday, last week won the maiden edition of BusinessDay “Good Governance Award” in healthcare development and security, making him the best performing Governor in the country in those two sectors of the economy. 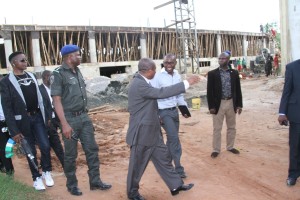 That Governor Orji won the prestigious awards, organized by BusinessDay, the foremost business media organization in Nigeria did not come to Abians and friends of Abians by surprise, because of the commitment and zeal with which the Governor is piloting the affairs of the State.

Governor Orji at the inception of his second tenure in office vowed to uplift the standard of living of the people and the image of the State. Consequently, this quest to bring good life to the people spurs him to invest in sectors that impacts positively on the people and that include healthcare and security.

His Excellency believes that the dead does not enjoy dividends of democracy, which explains why he is improving infrastructure in the health sector to provide quality healthcare for the people.

The commitment of Governor Theodore Orji to provide adequate healthcare for citizens and residents of Abia State was demonstrated when he commissioned a dialysis centre in Umuahia, the State capital.

With the commissioning of the centre, first of its kind in the entire southeast geo-political zone of the country, Governor Orji fulfilled one of his campaign promises, which was to provide adequate health care for the citizens.

According to Professor A.U. Mbanaso, medical director, Abia Diagnostic Complex, Governor Orji took an irrevocable decision in September 2007, few months after his inauguration as the third democratically elected Governor of Abia State to replicate what he saw at Howard University Teaching Hospital in United States of America, where all units of a medical facility were available in one location.

This decision of the Governor according to Mbanaso, led to the partnership between the State and Me-cure of India, which started with the most up to date equipment in diagnostic laboratory.

Furthermore he unfolded his health master plan which has reengineered, reformed and rejuvenated the State of health in the State.

Also Eddie Onuzuruike, in his account of the health programme of Governor Orji, noted that dialysis machines before 2007, were strange medical contraptions to the extent that if they were sent free of charge to most hospitals in Nigeria, people will push it aside as there were no skilled manpower and personnel to operate it.

As it was, people in the South East who had renal ailments had to book for sessions in University of Nigeria Teaching Hospital (UNTH) Enugu or travel abroad at huge cost for attention and comprehensive analysis.

The present administration  in the State has acquired seven dialysis machines-one serves as standby spare, another set aside for HIV patients, while Hepatitis sufferers have one to themselves. The remaining four are left for normal patients to avoid complications, which may result from contamination of blood.

Apart from this, the State Government is also setting up 100 bed Hospitals in nine Local Government Areas carefully selected from the three Senatorial Zones of the State. These are in Arochukwu, Ohafia, Umuahia South, Okeikpe. Others are in Ikwuano, Aba North, Obi Ngwa, Ugwunagbo and Osisioma. Out of this lot, Obi Ngwa and Ikwuano are being raised from the scratch.

It is a well-known fact that Abia State under Governor Theodore Orji accords healthcare delivery a top priority. The Administration is therefore not leaving any stone unturned in its commitment to delivery of quality health services to the people.

The construction of 250 new primary healthcare centres across the 17 Local Government Areas of Abia State and the establishment of the state primary healthcare development agency are in line with the National Healthcare Policy, geared towards making healthcare available to people, especially those at the hinterlands.

The executive support and personal involvement in all rounds of Immunisation and De-worming of school children, war against measles, sensitisation on cancer, hypertension and diabetes, exclusive breastfeeding and attracting medical teams for free medicare services to the people, are all geared towards ensuring not only a sound health system for women and children, but for the entire populace.

Apart from the State Government’s programme against maternal and infant mortality, the administration seeks out well-meaning non-governmental bodies to take healthcare delivery to the people. The office of the Governor’s wife is equally supporting people living with HIV/AIDS as well as empowering the less-privileged and indigent women in line with the UNH4 objective of ensuring optimal health for women and children.

Meanwhile, about 12,603 HIV/AIDS patients in the state are to receive government minimal support services as part of commitment towards reducing the rate of infection and eradication of the virus in the state.

Also, about 7,351 carriers of the virus would equally receive treatment in various outlets in the state.

Consequently, 33 counseling and testing outlets and seven comprehensive Anti-Retroviral Therapy (ART) centres in the three senatorial zones of the state have been established to reduce the rate of new infections.

Also pregnant women in Abia State are to access the services of prevention of mother-to-child transmission by going to the nearest centres for counseling, testing and treatment in order to deliver a HIV-negative baby, and free the next generation from the virus.

Recall also that Abia State Government and four United Nations Health agencies (UNH4) have worked out an arrangement to deepen areas of partnership in providing healthcare for the good people of the state.

UNH4 team- comprising UNICEF, UNFPA, WHO and World Bank, at a recent visit to the state, pledged to sustain its relationship with the Abia State Government to facilitate optimal healthcare delivery for women and children.