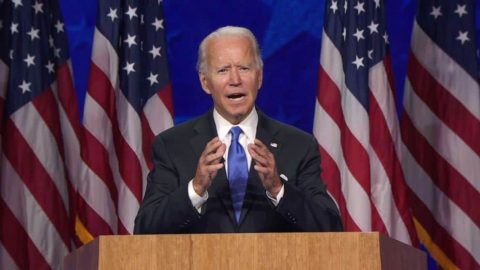 This culminates political career that spanned 36 years in the Senate, eight years as vice president and two previous attempts at the nation’s highest office.

“It’s with great honor and humility that I accept this nomination for president of the United States,” Biden said from the Chase Center in Wilmington, Del.

“It’s time for us, for we the people to come together.”

Biden said the election is important because it comes at a time of four crises dealing with the worst pandemic in 100 years, the worst economic decline since the Great Depression, protests for racial justice and the accelerating threat of climate change.

“Are we ready? I believe we are. We must be,” Biden said. “We know in our bones, this one is more consequential.”

Biden, who previously ran for president in 1988 and 2008, also embodied the ability to get back on his feet after the deaths of his first wife and infant daughter in a car crash, and the death of his adult son from a brain tumor.

Facing a lack of enthusiasm, Biden won widespread support for his choice of Sen. Kamala Harris, D-Calif., as his running mate.

Harris, a former prosecutor and state attorney general, is the first Black woman and the first Asian person on a major party’s national ticket.