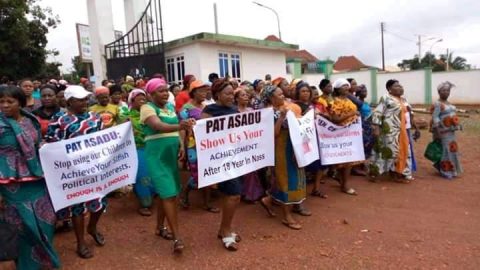 The protesters who displayed placards with different negative inscriptions, had stormed the Nsukka local government headquarters where they called on the two members of the National Assembly to resign honorably for poor representations.

Some of the placards read thus: “Sen. Utazi, stop bible quotation and show us your achievements.”

African Examiner recalls that on 5th of September 2020, a group under the platform of Concerned Uzo-Uwani Youth Movement passed a no Confidence vote on Sen. Chukwuka Utazi, Hon. Martins Okeh of the Federal House of Reps. and Hon. Okika of the Enugu State House of Assembly on the ground of poor representations.

Meanwhile, checks by our Correspondent revealed that the protest was allegedly politically motivated over 2023.

However, efforts to speak with Senator Utazi, by our correspondent hit the rock, as he did not take the calls put across to him on his mobile phone, neither did he respond to the massage sent to him, even as Dr. Asadu’s mobile line was sounding not reachable as at the time of filling this report.

Senator Utazi, is currently serving his second term in office as the Senator representing Enugu North senatorial district at the upper chamber of Nigeria’s national Assembly (NASS), just as there are strong indications that the incumbent governor of the state, Chief Ifeanyi Lawrence Ugwuanyi is eyeing the seat come 2023.