Again, Nigeria Slips Into Another Recession Under Buhari 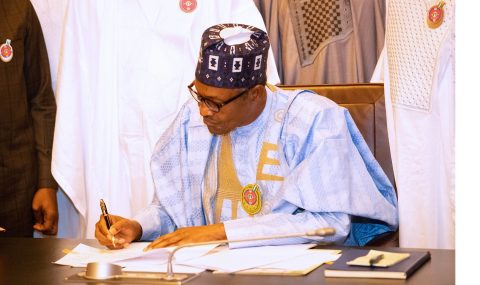 (AFRICAN EXAMINER) – According to the National Bureau of Statistics (NBS), the country’s official data agency, Nigeria has recorded a second recession in the Buhari’s administration.

According to NBS, Nigeria slipped into recession at the end of the third quarter (Q3) which ended in September.

African Examiner reports that Nigeria went into a recession in 2016 after a lull in economic activities due to the delay in the appointment of ministers and other key appointees after President Buhari assumed office in 2015.

The NBS stated that the recession is the worst since 1987 because the Gross Domestic Product in real terms declined by -3.62% (year-on-year) in the third quarter of 2020 and is driven by the long closure of the Nigerian borders which stopped economic movements across the borders.

“Nigeria’s gross domestic product (GDP) recorded a growth rate of –3.62% (year-on-year) in real terms in the third quarter of 2020,” NBS disclosed on Saturday.

“Cumulatively, the economy has contracted by -2.48% While this represents an improvement of 2.48% points over the –6.10% growth rate recorded in the preceding quarter (Q2 2020), it also indicates that two consecutive quarters of negative growth have been recorded in 2020.

“The performance of the economy in Q3 2020 reflected residual effects of the restrictions to movement and economic activity implemented across the country in early Q2 in response to the COVID-19 pandemic.

The report also disclosed that during the quarter under review, aggregate GDP was at N39,089,460.61 million in nominal terms, saying that the performance was 3.39% higher when compared to the third quarter of 2019 which had an aggregate of N37,806,924.41 million.

It stated: “This rate was, however, lower relative to growth recorded in the third quarter of 2019 by –9.91% points but higher than the proceeding quarter by 6.19% points.

“For clarity, the Nigerian economy has been broadly classified into the oil and non-oil sectors: The contract mark the beginning of a full-blown recession and second consecutive contraction from -6.10 per cent recorded in the previous quarter of this year.”