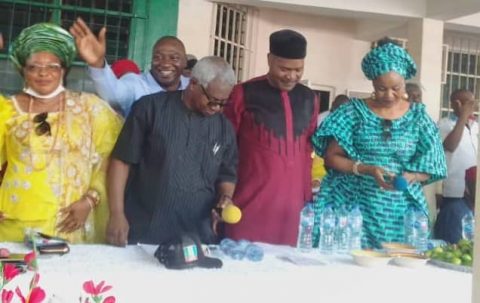 (AFRICAN EXAMINER) – Ahead of the 2023 general election, the Director General of Voice of Nigeria (VON), Mr. Osita Okechukwu on Sunday disclosed that the ruling, All Progressives Congress (APC) may likely zone the party’s  presidential ticket  to South East geo political zone of the country  in the interest of  equity, justice and good conscience.

Speaking  during the  Enugu state APC expanded caucus meeting held  at the party’s secretariat in Enugu ahead of the Isi-Uzo local government area State Assembly bye-election scheduled  for October 31, 2020, the VON boss, stated that  an Igbo president would bring his entrepreneurial spirit to transform the country’s economy.

He, however, called on the party faithful in the state  to join him in applauding the party state chairman,  Dr. Ben Nwoye, for his efforts in uniting the party and bringing back aggrieved members such as  the pioneer  Deputy chairman, Adolphus  Ude and pioneer women leader,  Lolo Queen Nwankwo among others.

According to him, APC has only one executive committee in the state led by Dr. Nwoye and enjoined members to work to consolidate the new found peace and unity.

He said “I assure other Nigerians that Ndigbo will bring their entrepreneurial spirit to transform the country.

“At home I want you to embrace the agricultural project of the federal government as part of President Muhammadu Buhari’s agro revolution. Federal government will provide the necessary incentives like seedlings, fertilizer, tractors as well as agro processing centered,” he said.

It equally resolved to participate effectively in the bye-election for Isi-Uzo assembly election scheduled for September 31st by the Independent National Electoral Commission (INEC).

The state chairman of the party, Dr. Nwoye, while Addressing the meeting, said that for the first time the party was poised to produce the state Assembly member from Isi-Uzo local government area, calling on all party faithful and stakeholders to use the coming by-election to demonstrate their support for the party.

He said: “People hoping to grab political position in 2023 are dreamers. We have to first take over Isi-Uzo as a demonstration of our readiness to take over Enugu state in 2023. So every hand must be on deck to achieve this.

In his remark, Immediate former national vice chairman SouthEast, Chief Emma Eneukwu expressed happiness for the peace initiatives of Dr. Nwoye which he said saw to the reconciliation of aggrieved party members.

He equally stressed the need for unity of purpose to make the party win the coming state assembly by-election and other elections in 2023.

African Examiner reports that highlight of the meeting which was attended by the party chieftains from the three senatorial district of the state, was the vote  of confidence passed on the state chairman, Dr. Nwoye and members of the state working committee, SWC.