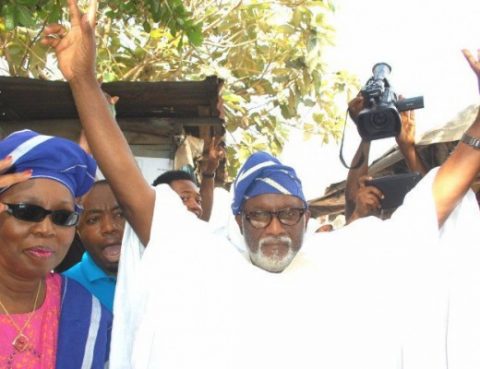 (AFRICAN EXAMINER) – The Independent National Electoral Commission (INEC) has declared Gov. Oluwarotimi Akeredolu, candidate of the All Progressives Congress (APC), as the winner of the governorship election held on Saturday in Ondo State.

Prof. Abel Olayinka, the Returning Officer of INEC, who is also the Vice Chancellor, University of Ibadan, said that Akeredolu got 292,830 votes to defeat Eyitayo Jegede of Peoples Democratic Party (PDP) who got 195,791 votes while Ajayi Agboola of Zenith Labour Party (ZLP) got 69,127 votes.

Olayinka explained that Akeredolu secured the highest number of votes among other candidates and scored 25 per cent in all 18 Local Government Areas (LGA’s).

“Oluwarotimi Akeredolu secured the highest number of votes among the 17 contestants. He was expected to score 25 per cent of votes in 12 LGA’s, but he scored 25 per cent in all 18 LGA’s in the state.

“Moreover the margin of lead, that is the difference between his votes and the candidate who came second, is higher than the number of cancelled votes.

“So, consequently, having satisfied the requirements of the law, I hereby declare Oluwarotimi Akeredolu as the winner, and is hereby returned elected,” he said.

Akeredolu won in 15 of 18 Local Government Areas (LGAs) of the state, while Jegede won the remaining three LGAs.

Ajayi Agboola, candidate of the Zenith Labour Party, who is the present deputy governor of the state, did not win any LGA, and came a distant third.

Eyitayo Jegede of the People’s Democratic Party  (PDP) won in Akure South, Akure North, and Ifedore LGAs, while ZLP did not win in any LGA.

The breakdown of the results showed that Akeredolu scored 13,278 votes in Ile Oluji/Oke-Igbo Local Government area to beat Jegede and Ajayi, who polled 9,231 and 1,971 votes respectively.

In Irele Local Government area, Akeredolu won with 12,643 votes, followed by Ajayi, who polled 5,904 votes ahead of Jegede, who scored 5,493 votes.

Akeredolu also won in Akoko North-East Local Government area with a total of 16,572 votes, while Jegede and Ajayi tagged along with 8,380 and 3,532 votes respectively.

Similarly, the APC candidate won in Akoko South-West Local Government area with 21, 232 votes, followed by the PDP candidate, who polled a total of 15,055, while their ZLP counterpart scored 2,775 votes.

The story was not different in Akoko North-West Local Government area, where Akeredolu garnered 15,809 votes, with Jegede having 10,320 votes and Ajayi 3,221.

Akeredolu also won in Ondo East Local Government area with 6,485 votes, closely followed by the candidates of the PDP and the ZLP, who polled 4,049 and 3,221 votes respectively.

It was a landslide victory for Akeredolu in his Owo Local Government area, where he garnered a total of 35,957 votes to beat Jegede of the PDP, who scored 5,311, and Ajayi of the ZLP, who scored 408 votes.

The APC candidate also recorded victory in Akoko South-East Local Government area with a total of 9,419 votes over candidates of the PDP and ZLP, who scored 4,003 and 2,004 votes respectively.

It was, however, a different story in Akure Local Government area, where Jegede of the PDP recorded a resounding victory with a total of 47,627 votes to beat Akeredolu of the APC, who polled 17,277 and Ajayi of the ZLP.