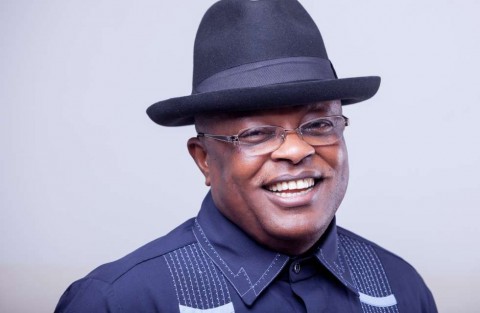 Umahi, finally decamped from his former party, the People’s Democratic party PDP to the APC on Tuesday.

Other government functionaries in the state that have crossed over to the ruling party with the governor, includes, Executive council members, Chairman of local government areas and all his appointees.

Speaking at the official declaration to APC held at the Christian Ecumenical Centre in Abakiliki Thursday before the officials if the National leadership of the party , Umahi said he sacrificed himself for the interest of South-East and people of Ebonyi State in general.

He commended Nigeria’s President, Muhammadu Buhari for the love and support he has for the people of Ebonyi State assuring they won’t let him down.

He said: “Stop building enemies in the Name of party, be yourself, accommodate others no matter your party affiliation. Don’t kill yourself or sale your future for the sake of party which is like vehicle of means to your desired destination

“Most rich men and some politicians don’t use one particular for many years. So, don’t expect then to remain in one car (party) while going to different occasion and desired destination party. Party or no party, we are one.

“I thank all the Executive Council members of Ebonyi State for standing with me. The new house we just built today will be based on thrust and equity. I enjoyed others who are yet to join to do so. Ebonyi is known as one party system. I am leading three million Ebonyians into APC.”

Ex-president of Nigerian Senate, Chief Ken Nnamani, in his remark, salute the courage of Umahi for taking a bold step towards actualisating the lgbo race. He also praised the Governor for the level of development going on in state adding that APC was known for one family and the time of opposition politics has gone.

Speaking at the event, the National Caretaker chairman of APC and Governor of Yobe State, Mai Mala Buni, used the occasion to welcome to formally welcome Umahi into the party fold and inaugurate the state party executive.

The ceremony was graced by top chieftains of APC from various parts of Nigeria, amongst who are,  Chairman, Progressives Governors’ Forum and Governor of Kebbi State, Governor of Niger State Sani Bello, Governor of Jigawa State and Attorney General of the Federation and Minster of Justice, Abubakar Malami, as well as APC Chieftains from South East Geo political zone of Nigeria.