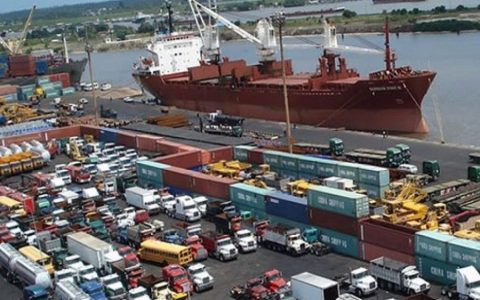 (AFRICAN EXAMINER) – Dr Samuel Nzekwe, a former President of the Association of National Accountants of Nigeria (ANAN), has implored the Federal Government to make concerted efforts toward decongesting  the Apapa-wharf  port.

Nzekwe made the call in an interview in Ota, Ogun.

He said the Federal Government needs to make concerted efforts to decongest the Apapa-wharf by providing infrastructure including effective roads and rail system that will  transport goods to various parts of the country.

Nzekwe noted that the bottlenecks have caused a lot of challenges, thereby making the cost of doing business in the country to be high.

“This development is not good for the economy because it has adverse effects for a country that needed to generate revenue from other channels.

“The government needs to fashion out measures so that goods sent to Apapa-wharf port will  be easily taken by rail system to nearer locations of the importers across the country,” he said.

The former ANAN president also suggested that the government could help in the dredging of the sea so that bigger ships would have access to the port.

Nzekwe said that trailers spend several hours and days in the gridlocks all in the sake of dropping containers at the port.

“There is  the need for an effective linking of Apapa-wharf port to other parts of the country so that trailers will not be concentrated in Lagos alone,’’ he said.

Nzekwe appealed to Federal and State Governments to beef-up security around Apapa areas and the country at large, so that life could be save when people are in traffic