Can we meet you Sir?

CASUOSTI declared strike action on February 17, 2014, what are the demands of the union? 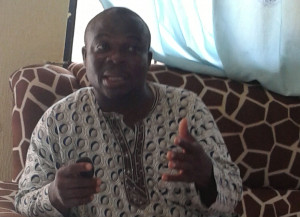 We have been on the issues that eventually led to strike which commence on February 17, 2014 for long. We have many requests which we have been agitating for before the strike. The issues border in the elongation of retirement age for academic staff to 65 years. All the polytechnics and Colleges of education nationwide are operating on 65 years retirement age for academic staff. It is only in Osun state that has not been implemented. We have been appealing to government to look into the issue, so that our members will not feel inferior to others elsewhere. The government has been promising to do it until it got to the climax when we did not see government commitment to implement it. Let me report that in 2012, the government gave union circular convening approval of the 65years retirement age for academic staff by Ogbeni Rauf Aregbesola, by way of elongation of service year from 60 to 65 years. The approval took effect from 1st of June, 2012, so on that bases we appealed to our colleagues that are already 60years who we thought we be useful to the system not to check out as a result of the elongation. They decided to stay because we were benefiting from their wealth of experience(s), so they decide to stay, so surprisingly by January 2013 government decided to disengage them by informing them to proceed on retirement. Compulsorily they were retiring them, since them we have been on the issue calling attention of government to it.

That is on the crucial issue. Another one is the issue of pension; it was the government that domesticated the new pension scheme in Osun state. You know the new pension law was an 2004 Act passed into law during President Obasanjo’s regime. Osun state domesticated in 2009 and it became effective in May 2010, so since 2010 government had started to deduce in our money, as in 7.5percent of salary and government is expected to add 7.5percent and remit the money to our pension administrators. We expected government to be remitting the money from time to time but government has not been remitting as at when due. Government claimed they have remitted up till June 2013 but by our own calculation the remittance government claimed was not up to June 2013. In one of the meeting with government, we did the analysis and we made them to understand that they have not remitted the pension fund up to June 2013 by our own calculation. It is simple arithmetic, from the time we started; using my salary as example I know how much was deducted each month, it is just to calculate total deduction and multiple it by two to get the cumulative. This issue of pension has many rudiments; apart from deduction and remittance is pension bond. The bond takes care of number of years put into service before the commencement of new pension scheme. The money will now be bonded, then certificate will be given to each staff and bond with Federal government is expected to appreciate every six-six months. From 2010 till date, the bond would have appreciated up to sevecren times. The minimum of appreciation is 10percent and that has not been put in place. That is why we are shouting that if you know you can’t respect the law why then should you allow it run at our own expense. If the know they can’t follow was the law stipulated, the scheme should be suspended. The other aspect of pension is group life assurance. We have being shouting and appealing to take up group life assurance. We have some of our members who had died and families they left behind are expected to have benefits by provision of this scheme. It said that minimum of N5million will be given to family of any staff that died in the operation of this scheme but that has not been done. Sometimes early this year, government made us to realize that it has been done, we were shown certificate by insurance company that it has been done for us. When we were shown, the Group Life Assurance covers Local government employee and civil servants in the state. We now asked that them you have not taken care of ours (Tertiary institutions staff) because we are not civil servants. Those of us in higher institutions are public servants, so if you have done this for local government employees and civil servants, we do not have confident that we are covered by that arrangement because in the past when anything came to civil servant in the past may be like car/housing loans, we did not benefit from it. By the time they were given 13th month salary in quote, the made it 100 percent basic for civil servants while we received 50percent higher institutions staff. For this reason, we cannot say that arrangement covers higher institutions. Our position on pension is that we want it suspended and our money that has not been remitted to our PFAs should be refunded to us. We want the remitted fund to be with the pension fund administrators. This will give government time to go back to drawing board to perfect issue relating to contributory pension scheme, so that when the government is ready we would resume again and continue with the scheme.

The other aspect is recruitment of academic staff to fill up vacancies in academic units of various institutions. We have some department that has only one lecturer and some with two lecturers with the multitude of students; tell me the magic just only one person will put in place to meet the academic needs of the students. We are saying they should recruit so that the standard would be sustained.

Other aspect is full payment of our salary, presently we operate on 90 percent bases. In whole of south west, it is only Osun state that operating on 90 percent of Consolidated Polytechnic and College of Education Academic Staff Salary Structure (CONPCASS). We are receiving less compare to other states or federal Institutions even in south west, despite the fact that State of Osun government is much committed to regionalization. We are made to look inferior to our counterpart in other states. This issue of salary is one of the things regulatory bodies such as NBTE will consider. Aside that we hold the same certificates and render the same service, when we are made inferior the morale will be dampened.

The last one is issue of early payment of salary, though government attributed this to dringling in federal allocation to the state. Attached to that is remittance of deduction made on our salaries. Now payment is online and some deduction we normally do internally before are now been done through e-payment. So deduction made by government such as; Cooperative societies, Union dues, bank loans and others are creating problems due to late remittance, especially the bank loans. We are shouting that remittance should be made for deduction on behalf various individuals or groups as soon as alert for salary drop.

Still on salary issue, some of your members are complaining that they are not receiving pay-slip…

You are right! All we receive now is credit alert for salary, the breakdown of salary are not known to staff. We have been asking government when we have meetings to ensure staff gets pay-slip monthly. Even this deduction you are making, let there be pay-slip given to all staff so that they can keep records and refer to it when necessary. You there is level you can keep alert on your phone; you know when the alert/messages are too many some will get deleted automatically. Before e-payment started, we used to get pay-slip. I have pay-slip of 10-15 years ago with me but now we operate on e-payment, we are not receiving pay-slip again. We are trying to impress it on government to continue give us pay-slip.

What is the position of government on your demands?

I would want to commend government on elongation of retirement age to 65years because government has sent the bill to State House of Assembly and the bill has pass through the first reading. We implore the house to fast track the passage of the bill, so that the lingering crisis around that one will be settled forever.

Would you compromise on your stands because in labour dispute like this you don’t 100 percent of your demands?

You the demands are not too many and we have the feeling that government would meet all our demands. However, if the government due to drop in federal allocation to the state cannot implement the full payment of CONPCASS, we will understand but they should attend to other issues. If the government can suspend pension deductions and make refund of money not yet remitted to our PFAs. With that we see that government is making progress on that one. On aspect of recruitment, they should recruit new staff and if they want to recruit; our position is that the recruitment should take care of people on part-time and contract appointment. Part-time and contract lecturers that have been with us for more than six years should be given priority. They are people we can say, they have been tested and trust for the service they can render. Our emphasis is that government should give priority to people on contract appointment as lecturers. So, if the government can go to that extend no problem. If they show commitment that remittance would be made as at when due and avoid unnecessary delay. If they cannot pay full salary now, we understand the situation as a result of drop in federal allocation to the state is tenable. With that we go back to lecture hall.

You know strike happen to be the last option, so after consultation, dialogue and negotiation failed to yield any result then we go on strike. Issue of strike is not a good thing, even those of us managing the strike we know the hell we go through. We had course to discuss and dialogue with government but when all dialogue and consultation were not yielding anything, we decided to embark on strike. Like you said it has become annual ritual. In Osun state, we have been on the same issues. The issues that led to strike in 2011, 2012, 2013 and now 2014 are the same. If government has yielded to these demands we won’t have go strike. We still see there is cordial relationship between union and government. You know the labour law does not permit union to embark on strike immediately you have issues with your employers. There must have been a lot on dialogue, consultation, writing of letters on the matter. We are calling for sincerity on the part of government. Government should be sincere and see that when any strike happens, a lot of people will be at the receiving end. We talk of host communities of the institution; economically the communities are now down. Talk of the effect it will have on entire students, they would not graduate at the right time as a result of strike. You will notice instability in education industry of state as a result of strike. For those managing the strike, we don’t find it easy. It is always tough; holding meetings in the day and night, travelling. We are not even settling with our families as a result of the need to pursue the strike to logical end.