Re: Kachikwu On the Run, Wanted for Graft 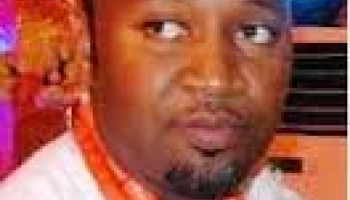 I read with lavish amusement an article by one Florence Agbo, media aide to international fraudster and discredited business man, Dumebi Kachikwu, in which she made certain inaccurate and incendiary remarks about my person. Once again, I am back into the boxing ring of ideas to defend myself against such vicious attacks.

It is unfortunate that he was allowed to use the reputable Naij.com site to spread falsehood in a bid to cover his criminality.

It is out of my character to condescend to the low life of the Self-declared slave and her paymaster. But in as much as moderation is the virtue of which hubris is the opposite and ruinous vice, I will not entertain any dummied-down cheerleading hocus-pocus garbage from criminals and under-achievers who have done everything possible in their lives and succeeded in none, except fraud.

I am thus replying Dumebi Kachikwu more as a matter of principle, to set the records straight, not that he said anything important outside his schizophrenic self-indulgent eccentricities.

Firstly, the story “Kachikwu on the run, wanted for graft charges,” was a written by a reporter of the Per Second News after careful investigation.  In the report, he merely pointed out that Dumebi Kachikwu was once more engaging in criminality by using an office in Asokoro as a clearing house for shady deals.

But in his characteristic style, Dumebi Kachikwu makes no effort to hide his frustration. Instead of addressing the issues, he attacked my character. I am the managing editor with two other editors and not the writer. His attack on my character is telling of an unrepentant gangster, unabashed and more than a little intoxicated with glamorous verbosity and linguistic inflation.

In their desperation they couldn’t get the proper spelling of my name, giving credence to the fact that they don’t know me.  In the poorly written write up, they claimed I have personal grudges against Mr Kachikwu. For the records I don’t know Mr Dumebi Kachikwu, I have never seen him nor have a discussion with him.  I don’t do con business, so where is the personal grudges coming from?

The writer also extolled professional mediocrity, by claiming the story is borne out of the need for ugly blackmail.  Where is that coming from? Did anyone from our news media contact Mr Dumebi Kachikwu or request for anything from him? I would be glad to see the proof.  Is it possible to beat Dumebi Kachikwu in the game of blackmail and fraud in a terrain where he reigns supreme? This is quite understandable as he has no good breeding.

Being an Illegal Immigrant

It sounds too bad to be true, but then it is. For those who knows him know that he rings hollow. The guy lacks intellectual focus, clarity of thought, has misconfigured ideas, which is why he strays from one subject matter to the next, leaving the reader bemused and unenlightened.

For the records, I am an American Citizen, a proud one for that matter.  I am not a no good like her slave master. I served the United States Government, as a distinguished U.S Air Force Personnel. People of questionable characters cannot be allowed in the number 1 Air Force in the world. I have represented the United States during war time in Afghanistan, Iraq and defended homeland America ensuring combat troops are fit to fight. Not only that, I got sterling performances, medals of honour and was stationed at the Joint Base Andrews which serves the member of congress and the President of the United States.

Can an illegal immigrant serve the United States Government? Can a criminal or person with questionable character be allowed to hold strategic military position where I have access to classified documents.? Can a blackmailer rise to the top where he would be granted highest security clearance by the United States authority? The answer is a Capital NO. It is obvious they don’t know me.

In his search for brief excitement and controversy, he said the Per Second News is run by me and my family members. He shot himself on the foot. His cavalier ranting, infused by unfettered and peculiarly tired epithets, and out-of-context references depict Dumebi Kachikwu as an emotionally emasculated, demented, illiterate moron with attention deficit disorders.

The Per Second News is a well registered news media outfit with about 20 employees, both in the United States and Nigeria. For the last couple of years we have contributed our own quota to the development of Nigeria by employing no less than 15 journalists and paying our taxes when due and that is why we have patronage from the government, MDA’s and the private sector.

He claims a picture of me and President Obasanjo was a passing off. For your information I don’t celebrate taking pictures with public officials, in the pictures with the ex-president taking from social media space by the media aide slave and her master, was  a visit to the president in Atlanta while he was recuperating after a minor medical procedure and I went there with the late former Nigeria Ambassador to the U.S. whom I proudly worked with for many years.

If they care to look well, they will see far more pictures with honourable and hardworking people. I don’t pass off or drop names.

Dumebi Kachikwu has been known to drop the name of his brother to swindle unknown hardworking businessmen of their money.

I am a man of honour and dignity, I have arranged several programs and have brought the current Vice President, the current Chairman of Governors forum, the current Minister of information to the White House, the State Department and the CSIS, where we met senior U.S Government officials and deliberated on issues that will be beneficial to Nigeria and Nigerians. They are all alive and you can ask them about me.

Dumebi Kachikwu is just a pious hyperactive loud- mouthed pompous windbag fraud.  Since he has nothing to offer, his vituperative outbursts and recourse to slander is a belated effort to conceal his fraudulent lifestyle and life of graft.

Over the years, he has been accused of having ties to defraud a former House of Representatives member of N750m, taking kickbacks from marketers and violating rules at the PPMC.

He was involved in the Atiku/Jefferson case,If there’s anyone that is questionable that the anti-corruption agencies need to beam their searchlight on it is Dumebi Kachikwu.

It was Dumebi Kachikwu, that broke the United States law and was arrested in the United States for driving on U.S highway without drivers license. For the avoidance of doubt, the case number is 00000002P0DX8 at the District Court of Montgomery County in the State of Maryland, according to the court he violated U.S Law by operating a vehicle while his driving privilege was suspended.

He was also involved in a contract breach where a U.S judge awarded a judgment against him, his resume includes a forcible entry and detainer case, a tax evasion case also in the United States.

He is the one on the run. The public should please ask Mr Kachikwu some important questions. His he currently in Nigeria? When is he due back in the country? Why has he shipped out all his cars and properties? Why suddenly the con businessman is abandoning his business?

Who is the culprit in the scandalous broad daylight graft and criminal activity?  He is the now-exposed, thoroughly disgraced but often vain controversial fraud, Mr. Dumebi Kachikwu.