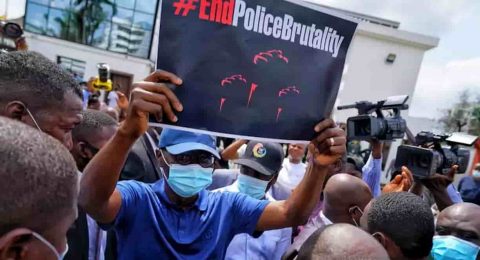 (AFRICAN EXAMINER) – Governor Babajide Sanwo-Olu of Lagos State has stated that footage from the Lekki Toll Gate indicated that the Nigerian military is responsible for the shooting of peaceful #EndSARS protesters.

The shooting has sparked both local and international condemnation.

Governor Sanwo-Olu speaking to CNN stated that the military is responsible for the shooting incident.

He said: “From the footage we could see because there are cameras that are at that facility, it seems to be that they would be men in uniform, they should be Nigerian Army or something.”

When pressed further the governor confirmed that “it was military officers who fired gunshots at peaceful protesters, I mean they were there and that’s what the footage shows.”

The military has since denied culpability in the shooting of protesters as they stressed that the video showing their presence was “photoshopped”.