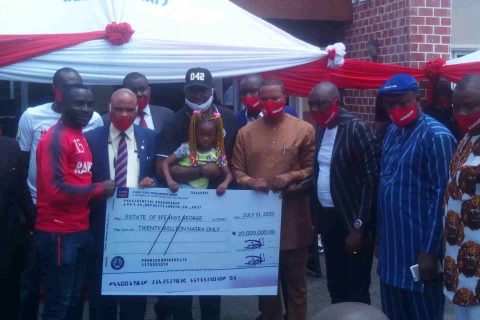 (AFRICAN EXAMINER) – For the numerous teeming supporters and fans of  Rangers  international FC of Enugu, South- East Nigeria, established in 1970, shortly at the  end of the Nigerian/Biafran war, which lasted three years, the club is not just an ordinary football team, but a virile institution and movement, hence its fan base cuts across the globe.

The Flying Antelopes, as it is fondly called in soccer cycle, was a source of inspiration to the Igbos after the deadly pogrom which consumed millions of sons and daughters of Igboland. At the end of the war, the club became the Vanguard that re- integrated Ndigbo into the mainstream of Nigeria’s socio- economic affairs.

It showcased the determination of Igbos to rise through the ashes of defeat to prominence.The club, which at that time paraded world class talented players, also proved its mettle in the field of play as it captured the then most prestigious trophy in the Nigeria football arena, the ‘Challenge cup’ as it was then called thrice in a role, 1974, 1975, and 1976 respectively, a feat that has not been equaled by any other football club in the country.

But regrettably, after the said impressive outings in the 70s, the performance of the top flight club, started dwindling, as it existed without any trophy till 1984 when it won the (FA) cup.

After the club’s success story in 1984, Rangers went back to her abysmal performance lane as it operated again in the field of play without a trophy for over three decades before it won the 2015\2016 Nigeria professional football league cup under the administration of the incumbent governor of the state, Chief Lawrence  Ifeanyi Ugwuanyi.

Many soccer stakeholders in Enugu and elsewhere, including Rangers fans had blamed the abysmal outings of the club in the recent past on poor players welfare, as well as engagement of near incompetent handlers, both in the management and technical departments.

However, knowing fully well that players, whether in Africa or Europe can only put in their best in the field of play, when their welfare is fully guaranteed, that is (motivation), the state government, and financier of the club, under the headship of governor Ugwuanyi, in his first tenure, probably based on professional advice did not hesitate to carry out some sort of overhauling in Rangers, with a view to changing its old narrative.

Part of the overhaul in the Enugu club side was the sacking of the former management team, led by Ozo Paul Chibuzor, an ally of immediate past governor of the state, Barrister Sullivan Chime, and Technical crew, under the watch of Coach Imama Akpakabor, though, these men won the 2015/2016 NPFL trophy for the club.

To further arouse the players moral, Governor Ugwuanyi, as an old ardent supporter of Rangers, had also introduced some mouth watering incentives in the club, including a comprehensive insurance package, by Premier Brokers Limited, provision of a state of the Art players camp with world class gym, among others, aimed at motivating the players.

Relying on the many years experiences of ex-Rangers player and manager, Prince Davidson Owumi, governor Ugwuanyi, did not hesitate to engage the Delta state born football Administrator as the General Manager (GM) of the Enugu team, which he once managed a few years ago. He was hired alongside a season Nigerian Coach, Olugbenga  Ogunbote, as Technical Adviser (TA), who later left Rangers for Lobi Stars of Markurdi,  Benue state.

Owumi, a one time Chairman of the defunct Nigeria premier League NPL, is currently working with, Assistant Coach of the Nigerian Super Eagles, Salisu Yusuf who was invited on a rescue mission, as Technical Adviser (TA), Barrister Emeka Ugwuarua, Secretary of the club as well as Barrister Amobi  Ezeaku who is the Team Manager (TM).

Suffice it to say that to a very large extent, the governor’s decision to effect some changes in the club yielded a lot of positive results, as the team under Owumi’s watch, aggressively revived its “Never Say Die” Spirit, as well as returned to the winning ways.

Also determined to ensure that Rangers regains and surpasses its lost glory as well as ensure that they do not betray the confidence reposed on them by the governor, Owumi, and his team embarked on recruitment of quality players to energise the team ahead of the 2017/2018 NPFL season.

Although, the said 2017/2018  league trophy eluded Owumi and his boys, but they succeeded in grabbing the NFF/AITEO Federation cup which was keenly contested in a final match between the Flying Antelopes and Kano Pillars FC,  played at the Asaba township stadium, Delta  state, South-South Nigeria.

No doubt, the introduction of the insurance policy for the flying Antelopes was a master stroke by governor Ugwuanyi, as the boys were always moving into the football  pitch with their whole hearts knowing fully well that in the event of causality, death or injury they, and their immediate families have something to fall back on.

Since the inception of the insurance package, the club has not recorded any death amongst its players until Sunday, 22nd March, 2020, when it lost one of her finest attacking sensation, Ifeanyi Onwubiko George, in a ghastly auto crash along the Benin Asaba Lagos highway, which claimed his life and that of Emmanuel Ogbu, a Rangers Feeder team player and Eteka Gabriel, a friend of George.

The 26 year old late Jessy No 15 utility Rangers player, who hails from Arochukwu in Abia state, and the two others were on their way to Lagos to see their family members when they met their untimely deaths.

George was later buried on March 28th, 2020 at Atan Cemetery, Yaba Lagos state, amidst rains of tears from friends and family members.

The decision to bury his remains in Lagos was taken after an exhaustive deliberation between management of Rangers and a family member of the Onwubikos who insisted that  their son must be laid to rest in Nigeria’s largest city.

In fulfilment of its own obligation of the insurance deal with Rangers management, Premier Brokers on Wednesday, 21st, July 2020, that would have been the late mercurial player’s birthday, presented a twenty million naira  (20,000,000.00) comprehensive cheque death benefit to his immediate family at Rangers camp in Enugu amid emotions.

The exercise, first of its kind in Nigeria football cycle which was held briefly, though, in a colorful ceremony was attended by top government functionaries, Captains of industries, football Administrators and other stakeholders in the round leather game, including management of the club .

Enugu state Commissioner for Youth and Sports, Hon.  Manfred Nzekwe, who represented governor Ugwuanyi, while commending the management of Rangers for the feat,  said the governor was sad at the sudden demise of the player. He however, consoled  the family left behind by the enterprising attacker.

In his brief emotional remarks, Rangers (GM), Prince  Owumi, who struggled to hold back his tears, stated that it was a dream come true for the management of the club in raising the welfare of players to the very highest level.

He said: “Sincerely, it is a very painful moment to talk of the death of Ifeanyi George, but it is also good that we are here, through the benevolence of the sports loving governor of the state, Rt. Hon. Ifeanyi Ugwuanyi, to present the insurance benefit of a dedicated player, late Ifeanyi George, who was supposed to be celebrating his birthday with us today” Owumi stated.

The Rangers boss disclosed that out of the said amount,  8 million naira will be used in opening an education Trust fund for the 4 year old daughter, Abigail Onwubiko, which the late player left behind, while two million will be used for her upkeep.

Also speaking, the Managing Director/Chief Executive Officer  (M.D/CEO) of the insurance firm, Sir. Goddy Ahuakagha, said, “What we have come here today to do has become possible because we have a listening and caring governor, Dr. Ifeanyi Ugwuanyi, the executive governor of Enugu state who graciously approved this insurance policy.

According to him, “the provision of the insurance policy, the Group Personal Accident Insurance Package was put in place to attract the best legs to the club.

Representative of the Minister for Youth and Sports, Hon. Sunday Dare, Comrade Kola Daniel, in his speech, said, “This is a very remarkable event in the annals of the game of football in the country and deserves a lot of commendation for the club management and the governor of Enugu state for putting together an insurance policy that will take care of its players and officials. I urge other football clubs to toe this line for the better performance of our footballers.”

Elder brother to the late player,  Sunday George Onwubiko who led other members of his family to the occasion, said, “We are sincerely appreciative of the efforts of Rangers management and the state government in honoring our late brother, Ifeanyi George Onwubiko. It is our wish to still have our brother with us but we can’t question God.”

A further breakdown of the total sum presented to the George’ family, indicates  that 4 year-old Ifeanyi George’ daughter, little Miss Abigail Ifeanyi George is entitled to eight million naira that would be used to open an education Trust fund account for her which will be accessed at the age of 18 years,  while two million naira will be used for her upkeep as the remaining family members will have the balance of 10 million naira.

Rangers management, it would be recalled, had activated moves to have the late striker’ family get the Life Insurance policy compensation due him as was graciously approved by the  governor of Enugu state following management’s request.

At the solemn event, Rangers jersey number 15 worn by the late player George, was officially retired by the management of Rangers International.