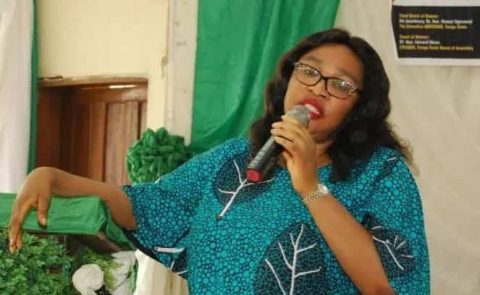 (AFRICAN EXAMINER) – The remains of the immediate past Caretaker Committee Chairman of Nsukka Council Area of Enugu state, South- East  Ms. Chinwe Ugwu, and that of her mother, Mrs Theresa Ugwu were on Thursday buried at their country home in Ugwu-agbo Edem area amid tears by family and friends.

African Examiner gathered that the mother, Mrs Theresa Ugwu, allegedly died of shock on August 4th, 2020, after the death of her daughter on July 4, 2020.

Delivering the funeral homily, the parish priest of  St Theresa’s Catholic Church Ugwu-agbo Eden, Rev. Fr Thaddeus Ezema, who led other 15 priests to the service, advised Christians not to allow material wealth and position to deceive them from living godly life.

He said: “Your wealth, education qualification and position in the society will not earn you heaven if you fail to use them to serve humanity and respect God.

According to the Clergyman, “In all we do we must know that we are on pilgrimage on earth and one day we will stand before God to give account of our stewardship.

He, however, expressed happiness that testimonies from the community and the Church showed that both mother and daughter used their wealth and position to serve humanity and the church.

“Everybody must prepare for death since it’s inevitable and is not how many years you lived on earth that matters but how well.

“Late Chinwe used her position as Transition Committee Chairman for three months to impact positively to many people including the church.

“Always ask yourself what people will say when you die, today people are saying good of Chinwe and the mother because they lived exemplary life and respected God.

The cleric urged the family of Ugwu, Nsukka Council area and friends to take solace that both mother and daughter lived life worthy of emulation.

In his emotional tribute, incumbent chairman of Nsukka local government area,  Barrister Cosmas Ugwueze described Chinwe as an ‘astute politician and seasoned administrator’ who served the council for three months and delivered to the acceptance of the general public.

He said: “Chinwe’s legacies as Transition Committee Chairman will remain evergreen in the minds of Nsukka people and Enugu North Senatorial district.

“The death of Chinwe has robbed us of good politician, seasoned administrator and woman that had the fear of God.

Our Correspondent reports that the service was attended by top dignities from various parts of Nigeria, including the Senator Representing Enugu North Senatorial district, Senator Chukwuka Utazi, former Council chairmen of Nsukka LGA, among others.

Late Chinwe, who was a onetime board member of the Nigeria Railway Corporation (NRC), was appointed TC Chairman for Nsukka council area by Enugu estate governor,  Ifeanyi  Lawrence Ugwuanyi on December 16, 2019.

She handed over to the elected chairman, Mr. Patrick Omeje, who equally died in office about two months ago, on March 4th, 2020.