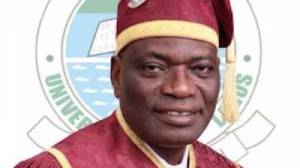 (AFRICAN EXAMINER) – The Vice Chancellor (VC) of the University of Lagos, Prof. Oluwatoyin Ogundipe, has been sacked.

The sack decision was reached and announced at the institution’s Governing Council at a meeting which was held in Abuja Wednesday in the premises of the National Universities Commission (NUC).

The announcement was contained in a statement signed by the Registrar and Secretary to the Varsity Council, Oladejo Azeez, titled: “Notice to The General Public On The Removal Of The Vice-Chancellor Of The University Of Lagos.”

The statement reads in part: “The General Public is hereby notified that at an Emergency Meeting held on Wednesday, 12th August, 2020 and in accordance with the statutory powers vested in it by law, the Governing Council of the University of Lagos removed Professor Oluwatoyin T. Ogundipe, FAS from office as Vice-Chancellor of the University with Immediate Effect.

“The decision was based on the council’s investigation of serious acts of wrongdoing, gross misconduct, financial recklessness and abuse of office against Professor Oluwatoyin T. Ogundipe, FAS.”

During the vote to relieve the former VC, seven members of the Governing Council voted for the removal of Ogundipe against four who voted against.

Still, one vote moved that Prof Ogundipe should be suspended.

The latest development might not be unconnected with the Leadership tussle between the institution’s Pro-Chancellor and Chairman of its Governing Council, Dr. Wale Babalakin who chaired the meeting and UNILAG chapter of the Academic Staff Union of University (ASUU).