WTO: Nigerians Berate US For Blocking Okonjo-Iweala As Consensus Candidate 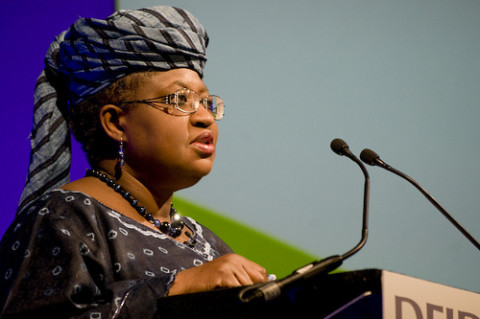 (AFRICAN EXAMINER) – Aggrieved Nigerians have taken to social media to berate the government of President Donald Trump for opposing former Nigeria’s finance minister, Dr Ngozi Okonjo-Iweala as the consensus candidate for the post of director-general of the World Trade Organisation.

Lots of Nigerians expressed joy when it was announced that Dr Okonjo Iweala will become the Director-General of the WTO but the happiness was short-lived as the US delegation is not in support of the move saying it is rooting for South Korean Trade Minister Yoo Myung-hee instead.

Reacting to this development, many Nigerians took to their social media accounts likening the current opposition by the United States to that faced by African Development Bank chief, Akinwumi Adesina, who later emerged victorious.

Many Nigerians are still basking in the hope that if Adesina can succeed despite all the oars, Dr Okonjo Iweal will succeed too.

Celebrity journalist, Dele Momodu, speaking on a TV programme on Thursday said: “It is very unfortunate. I don’t know why the US is always opposing Nigeria’s candidates but I believe the other countries will stand up against the bullying of America.

“Dr Ngozi Okonjo-Iweala is one of the brightest, not only on the continent but in the world. I look forward to congratulating her as soon as possible.”

@jeolaolarewaju also tweeted, “Even with America’s misconceived approach, she has the upper hand because she has shattered a couple of ceilings.”

@Dbest101 writes: “If God be for you @NOIweala, no man, not even @realDonaldTrump, can be against you.”

Noblemighty Njoku writes on Facebook, “Trump’s racism can’t be hidden nor his pure hatred for Africans.”

Akin Akinsehinwa writes: “The US should just let Nigeria be. The US made frantic efforts to block the re-election of Dr Akinwumi Adeshina but God put it to shame. The same God is still on His throne. So the US should expect another round of disgrace.”

Hephzibah Suobo writes: “Is the WTO a property of one country or all its members? She already had the majority of the votes out of 164 states. She can’t be stopped.”