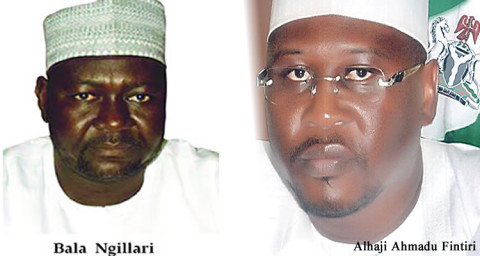 Few days after his “illegal” resignation and impeachment of his former boss and Governor of the state (Muritala Nyako), very few gave a serious thought to, or consider appropriate, the action of the newly sworn in Adamawa State Governor, James Bala Ngilari, when he headed to court to challenge self-unconstitutional action, demanding it to correct his misgiving.

Ironically, Ngilari despite being a Lawyer, whether due to coercion, deceitful political power play by the top notch gladiators or desperation to play along and later be spared the dangling killing rod, the new Governor was cowed, thereby lost in depth reasoning and did the unexpected – resigned his position prematurely and wrongly. 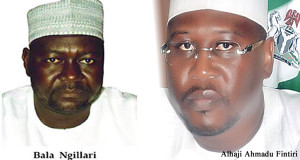 His former boss, Nyako who also testified in favour of his suit in court before the Wednesday Justice Adeniyi Ademola’s judgement, after his impeachment on Tuesday July 15, 2014 submitted that the legislators’ action against him was illegal, so also the purported resignation of his former Deputy. He predicted the entire drama will be upturned by the court. Nyako is right in his position.

It is not really clear whether Ngilari’s resolve to challenge his wrong action in court was self or due to advice from the fellow legal practitioners. Also, the lull and setback that characterized and featured in about two months litigation gave no much hope of any victory coming the way of the new Governor, even in the face of confidence displayed and assurances given by his leading Counsel, Festus Keyamo.

In one of the hearings, Lawyers to the parties involved in the suit if not grousing about not being duly served notice, came up with so many complaints and arguments, forcing Justice Ademola to adjourn hearing till last month, before the final verdict on Wednesday. The disposition of some of the respondents simply gave impression the suit would sooner or later be frustrated and the plaintiff would eventually lose out. But that ended up to be a wrong calculation.

To the surprise of the respondents and members of the public, Justice Ademola of an Abuja High Court did not only sack the former Acting Governor, Ahmadu Finitiri, but also ordered Ngilari to be immediately sworn in as the “substantive” state Governor. The learned jurist ruled that Ngilari’s letter was written when his former boss, Nyako was yet to be removed, which implies his resignation was supposed to pass through the Governor who was at that time, was still in power, instead of the Speaker of the state House of Assembly, hence declaration of his action (resignation) illegal,  null and void.

Ngilari’s victory as shocking as it may be has actually been prepared unconsciously by those pushing for his exit as well as his ex-superior. Otherwise, there was no need whatsoever for the ruling PDP power brokers to pressurize him to resign, addressed his letter to the state House of Assembly, ahead of Nyako’s sack all on dicey promises and shaky arrangement.  By their action, the ruling party chieftains wrecked on themselves indelible damage to their political ambition, as events eventually played out.

Nevertheless, the latest political development in Adamawa state justifies that one wrong step begets another. In other words, every unjust action is temporary – only lasts for a while. Besides, it also puts pay to the idiomatic expression – the evil that men do live behind them. Those who struggle to control power in the North Eastern state, by whatever avenue, must by now have themselves to blame. They have fallen victims of their antics and desperation to hold on to power.

The failed impeachment attempt against the incumbent Nasarawa state Governor Umaru Tanko Al – Makura is another very relevant instance. Unlike Nyako, Al – Makura foiled sack saga ignited violence, protest and most unfortunately recorded some casualties. The legislators’ wish to relief the Governor off his position was self-desired, self-seeking or better put, instigated witch hunting, hence not surprising, the failure of the plot which to a large extent, has finally been rested.

Yet, there are various dimensions, as well as some fundamental questions to ask on Finitiri’s ordeal and Ngilari’s sudden and elixir victory. First, is that is Nyako court’s ruling likely to go the same way like Ngilari’s in case there is any pending?; what happens to Finitiri, especially to his position as the Speaker of the state House Of Assembly? Although, the former Acting Governor (Finitiri) appears not helping his own cause, as he has reportedly appealed the Wednesday court judgement.

Specifically, Finitiri’s appeal decisions amounts to chasing  a shadow as the court’s ruling technically implies his ascension to the office of the Governor is illegal in the first place. Therefore, it is expected of him after the ruling, that he honourably returns to the state legislative House and reunite with his colleagues.

Another likely scenario to play out is impeachment scare by the Assembly members against the new Governor who by constitution is also required to have an elective Deputy. This poses another serious constitutional question, awaiting urgent and definite answer.

But despite that, impeachment option either naturally desired or influenced by any stakeholder or self-seeking boss anywhere, will be very expensive, wasteful and make little or no sense, especially as the next Governorship election is barely four months away.

Taking the point home, the court’s victory to Ngilari in actual sense is totally in order, yet unexpected. Indeed, it is like an elixir – which suddenly altered the politicking scheming and direction of Adamawa, most especially as the state bye election is scheduled for this Saturday (October 11, 2014). The new Governor had also put it succinctly later Wednesday in his inaugural speech after his swearing in conducted by the state Acting Chief Judge, Justice Ambrose Mammadi, that it was a “divine intervention” that earned him the sweet victory.

Specifically, the present political situation in Adamawa state has properly positioned the new Governor. It is very clear that it is 50 – 50 chances to the two leading political parties – the APC and PDP. Recall and as it was pointed out earlier in this piece, that the former Governor, Nyako’s, now of APC testimony in favour of Ngilari had a very strong bearing in the final judgement.

Equally, the PDP regardless of the avowed resolve of its member and former Acting Governor, Finitiri to appeal the ruling, had announced its acceptance of the court’s verdict, therefore urged its stalwarts in the state to cooperate and work with the new Governor.

There is no doubt that Governor Ngilari is the man of the moment. It is therefore left for the contending parties to play their games very well – with all the necessary but legal means to get the attention and woe the latest ‘bride in town’.

Coincidentally, the new dawn in Adamawa politics clashes with the period when the country is on the last march towards another political dispensation. Again, the final outcome of which of the rival political parties Ngilari pitches his tent with, will be a function of who plays the game well, but not without some other factors that may be peculiar to the state, such as the people, closeness to them, trust in leadership among many others.

Finally, Adamawa as we speak is somewhat like a virgin land – awaiting the best suitor to exploit its huge advantages to advance its future goals and objectives. So, political parties; politicians, it is over to you to determine how best and properly to utilize the prevalent benefit.

The Lagos Horn – Free Day; Let’s See How It Goes

The Lagos State government has for over a month embarked on a ceaseless public campaign and sensitization on the state free horn day. Its Commissioner for Transportation, Kayode Opeifa has since declared the maiden edition of the day will hold next week Wednesday, October 15, 2014 in all parts of the state. On that day, Opeifa announced the Lagos motorists are not expected to hoot their horns. The Objective of this according to him is to “celebrate those drivers who have contributed to safe driving habits on state roads”. It has also been articulated that the gesture is to gradually check the environmental nuisance and noise occasioned by horn hooting.

And to ensure the success of the campaign, the state government has announced it is engaging 1000 of its staff from the state’s Traffic Management Authority (LASTMA) and Vehicle Inspection Officers (VIO), although, not to make arrest, but ensure good level of compliance to the one day crusade. 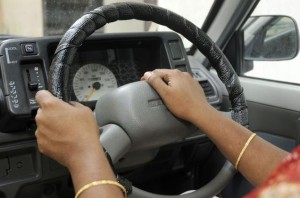 This is a good one, given the pre-occupied nature of the state, even traffic flow on its roads 24/7. An interesting aspect to me, as someone who also drives on the Lagos roads is the misuse of the horns by most of the city’s road users. Where you least expect, you see your co-road users engaging your hearing with the blastering and displeasing horn. My checks of the situation has indicated impatience, ignorance, intolerance and ‘idleness’ behind the steering account for mismanagement in the use of horn while on the wheels. So many of the commercial bus and truck drivers as well as average percentage of private car owners are the most found wanting in this indiscipline driving habit.

Personally, I’m glad a day like this is coming up and being pioneered in a city like Lagos. If nothing, it will send and entrench the civil mentality and understanding that you can drive very safely and successfully, without hooting of horn, either on the express road or highway. After all, there are other measure – facilities, such as the side and inner mirrors, trafficators, flash, parking and brake light to signal the direction, the state of moving or parked vehicles on the roads.

On a lighter, yet serious note, as Commissioner Opeifa has confirmed, there will be no arrest for flouting, only CAUTION by the law enforcement officers. So, next week Wednesday, it will be surprising to hear or witness otherwise from the self-seeking and overzealous traffic officers.

Finally, the forthcoming crusade is really worthy cooperation and compliance, at least to have and share personal experience of perfect, smooth and peaceful driving without horn hooting. Lagos road users look forward to the day and have a feel of how the experience lasts.