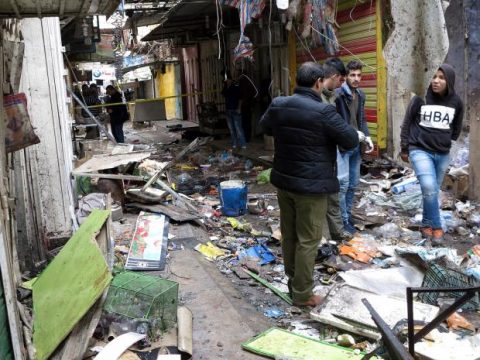 BALTIMORE, MD (AFRICAN EXAMINER) – No fewer than 28 people were killed, while over 50 injured Saturday, in a twin bomb which erupted in Baghdad, the Iraqi capital.

The explosions which responsibility has been claimed by the so-called (IS), occurred one after another in the busy al-Sinak market. More than 50 people were injured.

Many of the victims of the attacks, witnesses said worked in spare parts shops in the largely Shia area.

“They were gathered near a cart selling breakfast when the explosions went off”, an eyewitness told AFP.

IS in a statement claimed two of its militants wearing suicide vests carried out the attacks.

The group is under pressure from an Iraqi army offensive further north in Mosul, which is the last major IS stronghold in the country.

Police narrated that a roadside bomb exploded near a car spare parts shop, after which a suicide bomber detonated his device among the crowd.

Baghdad has been of recent frequently attacked and Shia districts have been the target.