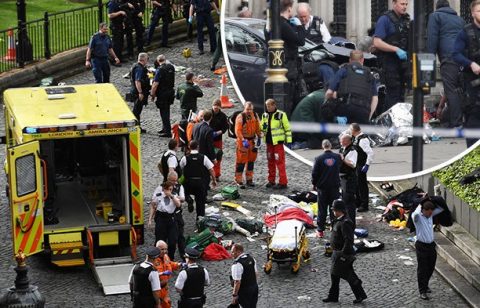 LONDON — Three people were killed and 20 others wounded Wednesday after a terrorist attack at Britain’s Parliament sent crowds of tourists and lawmakers fleeing for safety.

The victims included a police officer stabbed at the House of Commons who died despite the efforts of doctors and a passing government minister to save him.

Two other victims were struck by a 4×4 vehicle that plowed into people walking on nearby Westminster Bridge. Some of the wounded pedestrians suffered “catastrophic” injuries, doctors said.

A woman was pulled alive from the River Thames below the bridge with serious injuries.

The assailant, thought to be acting alone, was brought to the ground by a gunshot and also died.

“We’ve declared this as a terrorist incident and the counter-terrorism command are carrying out a full-scale investigation into the events today,” Mark Rowley, Britain’s most senior counter-terrorism officer, told reporters.

Lawmakers were kept on lockdown inside the House of Commons while police secured the scene, and tourists were trapped on the nearby London Eye wheel.

Steve Voake, 55, a children’s author who was visiting London for the day, told NBC News that he was walking over the bridge when he heard screaming.

“I thought it was a road accident. There was lots of panic and confusion. Then I saw a shoe on the ground, one body on one side of the road and one body face down in the water with blood all around it.”

Colleen Anderson, a junior doctor at nearby St. Thomas’ Hospital, said: “There were some with minor injuries, some catastrophic. Some had injuries they could walk away from or who have life-changing injuries.”

Journalists based at the Parliament reported hearing gunshots shortly after 2:30 p.m. local time (10:30 a.m. ET) and were told to stay in their offices./NBC