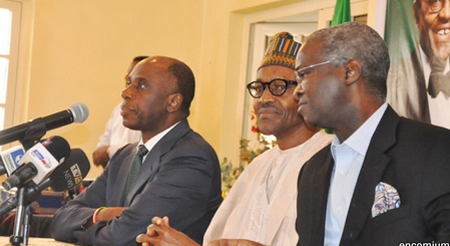 Besides the anti-corruption campaign, another issue that has attracted an overwhelming public attention as well as aroused so many interest, in the present administration, is the nomination, Senate’s screening and subsequent confirmation and later, the inauguration of the new Ministers and unveiling of their portfolios. The keen interest displayed by Nigerians on the matter is expected and can be hinged on two key factors, which include: records of performance of the previous administration, generally considered poor; so also were the roles, played by individuals in ensuring that incumbent President Muhammadu Buhari is elected as the Nigerian Leader. Whether the newly inaugurated Federal Executive Council (FEC) is late to come to life, or otherwise, the good thing is that, the Ministers have at last been given offices and they have since resumed duties. After all, ‘It is better late than ever’.Beyond the question of right offices given to particular Ministers – which expectedly are the comments that have trailed Mr. President’s announcement, I wish to restrict my focus to Ministries attached to certain personalities; President Buhari’s dimension to politics and issues; the typical Nigerian politicians’ mentality; the future of the country and direction of its politics.

The two personalities of interest to me are the former Governors of Lagos and Rivers States, Mr. Babatunde Raji Fashola (SAN) and Rt. Hon. Rotimi Chibuike Amaechi respectively and Ministries allotted to them.

In the case of Fashola who is now being regarded as the “Minister of Ministers”, I wish to share with Nigerians that I had previously have discussions with those who relate very well with the Lagos State mainstream politicians. They have declared before and after the election that the immediate past Governor of the State had offended the Oga patapata, therefore would be dealt with and wrecked politically. Among the smearing and strange campaign against Fashola was that he connived with the opposition Peoples Democratic Party (PDP) against his party during the last general elections. Who could have imagined this from Fashola? If you are shocked about this, that is Nigeria politicians for you. The other calculated castigations, including the website saga and the bloated expenses on construction of bore holes in the State house among others, against him are well known to the public.

The hatred for Fashola and moves against him as well as his political career, was evident in late August this year, when the Former Governor was deserted by his party’s Chieftains both in the State and beyond at books launch in his honour. On his own, “The Lion of Niger Delta Politics” (Amaechi) was also not given the chance to survive his nomination by President Buhari, as well as screening and confirmation as a Minister, through petitions by politicians in his State. It is believed that Amaechi’s enemies grouse is that he plotted the loss of the PDP and former President Goodluck Jonathan, therefore must be dealt with by all means possible.

Despite all of these, the two men were given very sensitive and strategic portfolios. Thus, it is no more news that Fashola was appointed the three-in-one Minister (Power, Works and Housing) and Amaechi in charge of Transportation. Just like his Lagos state’s counterpart, the former Rivers state governor is to oversee the aviation sector as the President announced only Minister of State for Aviation.

In the life and political career of the two gentlemen, there are lessons and messages from President Buhari to the politicians and the general public. Those who monitored my post on the new media hours after the inauguration Wednesday, would recall I mentioned on the twitter that Fashola’s sensitive appointment was instructive. I likened what happened to providence, matching it with one of the popular and creative Nigerian hip-hop star, Abolore Akande (9ice) philosophical track – “Life Drama”. The refrain in the track “From nothing to something” is of keen interest to me and very relevant here.

Fashola was never a politician, but he has been tested and trusted to be a good hand in the business of governance. In 2007, Amaechi as versatile as he is, was tamed by the powerful forces in his political party then – the PDP. He was gagged and forced to go on self exile, but at last, conquered those who said he should not be. In the two instances, the former superiors today now queue behind their former political ‘godsons’. Indeed, what a life Drama! Amaechi and Fashola faced fierce battle to be elected the Governors of their States.

Interestingly, both of them have recorded victories in their previous political assignments, but not without the controversies and allegations of corruption. Lastly, it was as if the screening of the President Buhari’s ministers was meant for, and only about them, as restless resenting voices against them, before and after their nomination keep agitating and fighting. But in the end, they survived the battle. With respect to the key offices given to the duo, despite the plots against them, by President Buhari whose government’s cardinal point is zero tolerance to corruption, there are strong messages and many lessons to learn.

First is that Mr. President has his exclusive way in which he operates, especially in unraveling and getting to the roots of serious allegations against those who he wishes to work with. It also confirms that the President is not a push over. With the appointment of Amaechi and Fashola, I make bold to say that Buhari has justified that he is a successful retired General – wise, independent and very critical in his thinking and in arriving at decisions on issues.

I wish to say here that these virtues are advantages on the President’s part and I am glad that they will rub off in his decisions on issues affecting the people and Nigeria as a whole, all things being equal. Most significantly, the nomination, confirmation and appointment into key Ministries of Amaechi and Fashola is a confirmation of trust and reward of diligence.

People have reasoned that the hope of Nigeria lies in the Ministries being supervised by Fashola. And I add, it is the same to Amaechi’s offices, just as human and goods must be transported from one place to another. There is no doubt, that there is a synergy in the Ministries being run by the two ex-governors. So, if the success of Buhari’s government is to be measured by the performances of the two men, so be it. Still, President is aware despite that, he carries the responsibilities for their success or failure. It only takes an intelligent fellow to realize that this is a serious issue; that if Buhari who hates corruption so much, could repose so much confidence and so engaged the two (as we have now), it goes to confirm that both Amaechi and Fashola are well appreciated, respected and valued by Mr. President.

Finally, the key lessons in Amaechi and Fashola’s ministerial saga is that any obligation that one has to discharge, he must deliver with commitment; discipline; honesty and high sense of responsibility. No doubt, those who have engaged in dirty politics (the masters and their foot soldiers) just to thwart the chances of the duo, I am sure will by now be regretting over wasted and fruitless efforts. Well, if they wished, there is still time for remedy – by cooperating and objectively taking the right steps and making positive advances. In other words, their past misgivings can still be forgiven, even though, they will remain in the memory. However, if they think they still have other plots to nail these men, I feel for them, as the outcome again is going to be nil! They should therefore please be told that Amaechi for instance, has a long history of overcoming treacherous plots, no matter the potency of the ‘mafia’ and his colleague; Fashola has ‘entered’ similar shoes. Wish Buhari, his cabinet and Nigeria well! 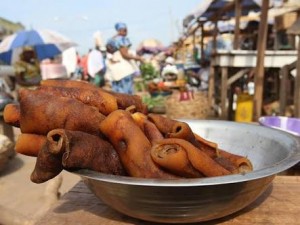 Ponmo – smoked or roasted skin of cow is a popular edible staple in Nigeria. Despite the repeated warning against its consumption due to inherent health complications, Nigerians, both at home and at commercial restaurants still go for it. This creates a large market for it mostly in the southern part of Nigeria.

Perhaps, this accounts for recent importation of strange specie of this common staple. It is in the public knowledge that some parts of Ogun State, South West Nigeria, have been flooded with a toxic and deadly ponmo. However, findings have shown that the product is actually meant for production of leather materials. How, who and what prompted converting such an item to human consumable still remains mysterious. This defines how less life is appreciated in this country, as well as how desperate and wicked some Nigerians can become, when it comes to making fortunes.

However, my concern is the coordinated effort of the State Government to respond to the situation. Here, I wish to liken the situation to the outbreak of the Ebola Virus Disease (EVD) in Lagos State last year July. It would be recalled the quick, comprehensive and very coordinated efforts of the State Government then, safe Lagos and the entire Nigeria from suffering a full blown Ebola disaster. And the collaboration between the State then, the Federal Ministry of Health and others was really commendable and superb in fighting the disease.

I am aware of the ongoing public sensitization against the product by the Ogun State Government on this food and heath challenge, so also the mopping exercise, up by the State health officials. Still, the State Government must be apt and prompt in relating with the necessary Federal Ministries for more logistics and perhaps financial support to nail the ongoing challenge in the bud. Governor Ibikunle Amosun should therefore shun complacency and spare no effort, in taking further and far reaching steps. That is the best way to go, so as to avoid another National tragedy.