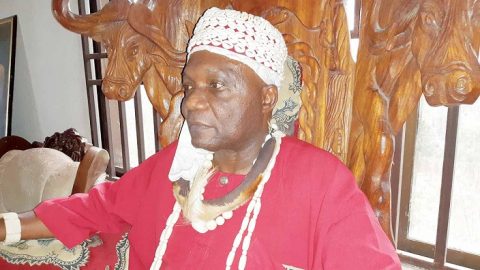 (AFRICAN EXAMINER) – The suspended traditional rulers of Anambra on Thursday said that they did not commit any wrong to warrant their suspension by the state government.

The monarchs stated this at a joint press conference addressed by Chief Chioke Nwankwo, the Igwe of Nawfia, in Abuja.

The traditional rulers were suspended on Tuesday for allegedly travelling out of the state without government’s approval.

The 12 monarchs had travelled to Abuja for an “official engagement”.

A letter announcing the suspension of the 12 traditional rulers for one year, was signed by Mr Greg Obi, Commissioner for Local Government, Chieftaincy and Community Affairs.

It said that the action was taken because they travelled outside the state “without government’s approval”.

But Nwankwo, at the press conference, said that the monarchs travelled to Abuia to thank President Mohammadu Buhari for the good things he had been doing for the South-East Zone.

“The visit was to thank Buhari for the appointment of notable Igbo sons and daughters into important positions since he became President.

“Is this an offence? The Second Niger bridge had been presented as an impossible task by previous administrations, but it is now becoming a reality under his watch as it is nearing completion. We appreciated him for this.

“We know that the project is very dear to our hearts because it is key to boosting business activities between the people of the South East and the entire country. Where did we go wrong here?

“The Enugu-Onitsha expressway that the Buhari administration is rehabilitating is another magnificent reason why we went to thank the President.

“The Enugu-Port Harcourt expressway rehabilitation that the government has also embarked on, is another reason why we took the step. These projects have been pipe dreams and had been elusive during past administrations.

“They have given the entire South Eastern people concerns. As Royal Fathers who are custodians of all our heritage, we felt that it was incumbent on us to express our appreciation to the president and to urge him to do more for the zone.

“Where have we committed a crime in these laudable efforts? On what ground is the Igwe and the state government angry with us?”

Nwankwo said that what the suspended traditional rulers had done was in exercise of their fundamental human rights, emphasising that “no one can take that from us”.

“Freedom of speech, freedom of movements are all enshrined in our constitution and grand norms. Any attempt against these amounts to muzzling the traditional institutions and we cannot accept that.”

He described the state government’s claim that the suspended traditional rulers did not obtain permission from the Commissioner for Local Government and Chieftaincy Affairs before the visit as “a lame reason”.

“Is there anywhere in our laws where freedom of movements by anyone is restricted within or outside the country?” he asked.

Nwankwo said that the Anambra government had no constitution of its own and there was no known law in the country stopping traditional rulers from having free movement.

“We are not ashamed to be associated with the great Prince Arthur Eze, who has been a major succour to the poor masses of Anambra and has emancipated many of them from economic bondage.

“As traditional rulers, if we come together to visit the President or associate with Prince Eze, is it an offense? There is no known law against this.”

He said that what the Anambra state governor had done was an attempt to “intimidate the traditional institution”.