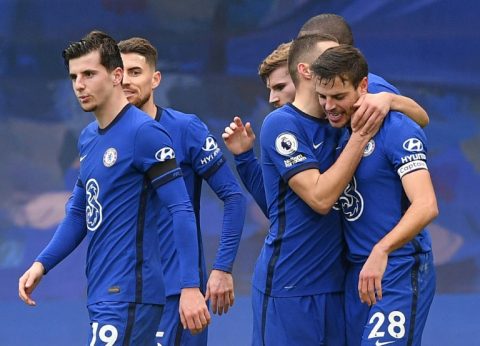 (AFRICAN EXAMINER) – Chelsea secured the first win of Thomas Tuchel’s tenure as manager on Sunday with a 2-0 win over Burnley at Stamford Bridge.

Meanwhile, Patrick Bamford delivered an outstanding performance with a goal and two assists as Leeds United stunned third-placed Leicester City in a 3-1 triumph on the road.

German manager Tuchel took over from the sacked former Blues midfielder Frank Lampard on Tuesday after signing an 18-month contract.

He oversaw an uneventful 0-0 draw against Wolverhampton Wanderers on Wednesday but was delighted when his new team claimed victory under his guidance for the first time.

Marcos Alonso then netted before the end of his first appearance since September.

“It should be a signal to our guys up front that we needed two defensive players to score,” Tuchel pointed out.

“We lack at the moment that last precision in the box. We will work on this. But in the end I cannot care less. We are happy to have the win.”

In Leicester, Harvey Barnes struck in the 13th minute to give the hosts a short-lived lead because Stuart Dallas burst through to restore parity for Leeds United on their next attack.

There were two more goals before the break from Leicester City’s Ayoze Perez and a header from Leeds United frontman Bamford, but both were disallowed for offside.

Bamford delivered a moment of brilliance on the 70th minute when he unleashed a spectacular strike into the roof of the net, before setting up Jack Harrison to finish the third goal.